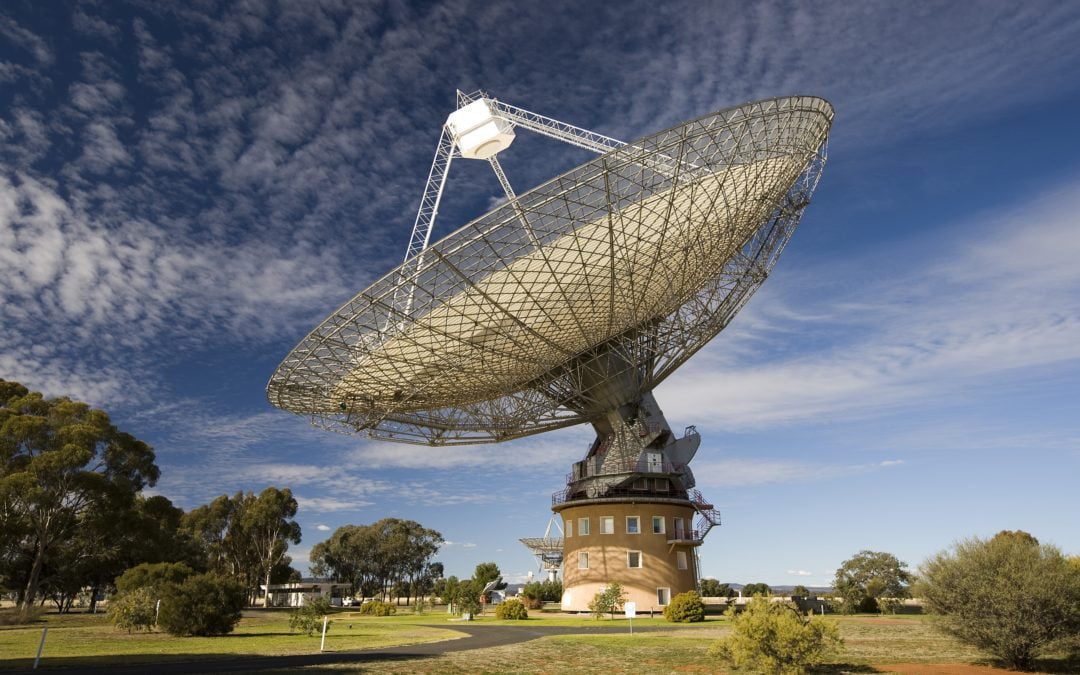 Above: CSIRO’s Parkes radio telescope is to be equipped with a new receiver system, called ‘cryoPAF,’ which will triple the telescope’s field of view. Image courtesy CSIRO.

TWO OF THE CSIRO’S RADIO TELESCOPE FACILITIES — Parkes and the Australia Telescope Compact Array (ATCA) — are to receive major upgrades that will dramatically boost their productivity.

Both are part of the Australia Telescope National Facility, owned and operated by the CSIRO and funded by the federal government. The upgrades are being financed by Australian Research Council Linkage Infrastructure, Equipment and Facilities (LIEF) grants.

Parkes will be given a sensitive new receiver system, called ‘cryoPAF,’ which will triple the telescope’s field of view. The $3 million project is being supported by a $1.15 million LIEF grant.

The ‘PAF’ part of the cryoPAF name denotes that it will be a phased-array feed, which is essentially a cluster of radio antennas located side-by-side, and situated at the focus point of the telescope… at the apex of the legs, high above the surface of the dish.

A telescope normally can look in only one direction at once, but with a phased-array its ‘eye’ can be electronically steered (without moving the telescope) to scan more of the sky. In the case of cryoPAF, the telescope will have a field of view three times greater than normal.

The ‘cryo’ part of the name indicates that the receiver electronics will be cooled (to –253°C) to reduce electrical ‘noise,’ which might otherwise overwhelm the weak radio signals the receiver is designed to detect.

The grant application was headed up by The University of Western Australia, which will direct the construction and commissioning of cryoPAF, which will designed, built and installed by the CSIRO.

Phased-arrays are not new — they’ve been used for a long time in advanced military radars and even medical imaging.

A CSIRO-built phased-array has been used on the Australia Square Kilometre Array Pathfinder (ASKAP) telescope in Western Australia, while a prototype of cryoPAF was successfully deployed on the Parkes telescope in 2016.

“Their further development at radio wavelengths has technology applications beyond radio astronomy with the potential to fuel the growth of space-related industries here in Australia,” said Dr Douglas Bock, Director of CSIRO Astronomy and Space Science.

cryoPAF’s wider field of view will enable it to make more complete surveys of the sky in less time than previous receiver systems.

“The new receiver will help astronomers to study fast radio bursts and pulsar stars, and observe hydrogen gas throughout the Universe,” said Professor Lister Staveley-Smith from The University of Western Australia node of ICRAR, who led the grant application.

Under this project, the ATCA digital signal processor will be replaced with a GPU-powered system that will double the telescope’s bandwidth capacity.

Originally intended for use in PCs and games consoles, GPUs have long now been pressed into service for computers that need to crunch huge amounts of scientific data.

The GPU project is being led by Professor Ray Norris from Western Sydney University, alongside CSIRO and seven other university partners.

“The upgrade will enable the telescope to study radio counterparts to gravitational wave sources, and it will enable it to make detailed observations of initial discoveries made with the Australian Square Kilometre Array Pathfinder and other Australian telescopes,” Professor Norris said.

“We’ve been developing specialised instrumentation for radio telescopes since the 1940s, when the field of radio astronomy first emerged, for our own and international telescopes,” said Dr Bock. “Through our close collaborations with research partners and our expertise in technology development, we’ll keep the telescopes at the cutting edge of science.”