The Sun in the centre 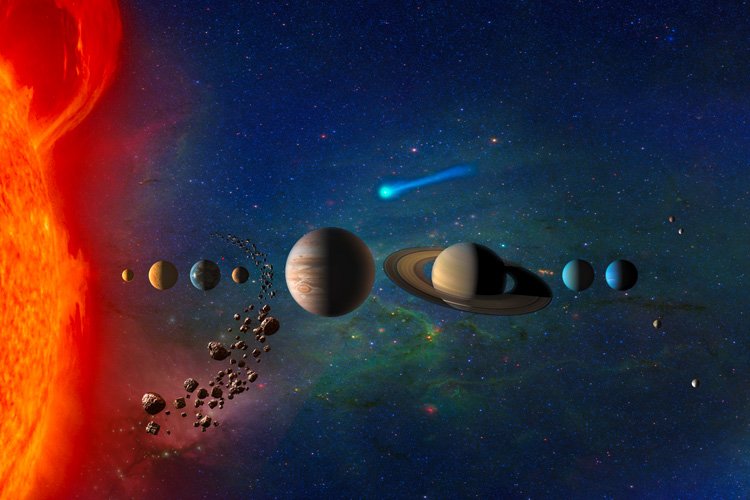 ABOVE: To us, it is obvious that the Sun is the centre of the Solar System. But it wasn’t so clear to everyone thousands of years ago. Image courtesy NASA/JPL-Caltech.

WHO FIRST PROPSED THAT THE SUN, rather than the Earth, lay at the centre of our local bit of the cosmos? That the Sun was the hub around which the planets, the comets and the other celestial bodies moved?

Most people would say Copernicus, just under 500 years ago. He certainly challenged the prevailing world view — endorsed by great ancient minds such as Aristotle and Ptolemy, and blessed by the Church — that the Earth, as home to Man, lay unmoving at the centre of the entire cosmos, all of which, including the distant ‘fixed stars,’ rotated around the Earth once per day. This vision, which also appears to conform with common sense and everyday experience, had been undisputed for more than 1,500 years, until Copernicus summoned up the courage to do so.

But Copernicus was not the first to propose such a ‘heliocentric’ cosmos. To meet the person who was, we need to go back more than 2,000 years to the island of Samos, off the coast of what is now Turkey.

We know very little of the life of Aristarchus. We even lack evidence from his own writings that he proposed such an idea, since they have mostly vanished. We must rely on a book by his near-contemporary Archimedes. In The Sand Reckoner, he tells his patron King Gelon of a book Aristarchus has written, proposing that both the Sun and the distant stars are, in reality, stationary, and that their apparent movements through the day and the year were due to the yearly travel of the Earth around the Sun and its daily spinning on its axis.

Why would Aristarchus put forward such a radical idea, even just as a hypothesis? We can find some of the reasons in a book he wrote that has survived. This contains his measurements and calculations on the relative sizes of the Sun and the Moon and their distance from the Earth. He knew that the Sun and the Moon appear to be the same size in the sky (which is why we can have total eclipses of the Sun), and that the Moon is closer. But how much closer?

Aristarchus tried to find this out by measuring the angle between the Sun and the Moon at the moment the Moon is half-illuminated (at First or Last Quarter). He claimed that the angle was 87 degrees, and from that calculated that the Sun was about 20 times further away than the Moon and therefore 20 times larger (since their relative sizes and distances must be in the same proportion).

The method was sound, but the data was not. It is a hard measurement to make. We would now say the angle was 89 degrees and 50 minutes, so the Sun and the Moon differ in size and distance by a factor of 400, not 20. But that only strengthens his argument. With the Earth known to be four times the size of the Moon, the Sun had to be at least five times the size of the Earth (in reality, 100 times). Why would the Sun deign to orbit an object so much smaller than it was?

That argument might have convinced Aristarchus, but not most of his contemporaries. They raised the argument that critics of Copernicus would put forward 1,700 years later. If the Earth is moving, so is our point of view into the cosmos. The nearer stars should appear to move back and forth relative to the more distant ones throughout the year, in what is called ‘stellar parallax’. We do not see such movement, so the Earth must be still. If the stars do move but they are so far away we cannot see parallax happen, then the universe must be incomprehensibly (and therefore unacceptably) vast.

Aristarchus and his few supporters were way ahead of their time. Solid evidence to back their view was a long time coming. Stellar parallax is so small it was not detected until the 19th century. Around the same time, we found the first indisputable proof that the Earth turned.

One last point. Did Copernicus know of Aristarchus and his idea? Did it provoke his own thoughts? It seems not. A translation of The Sand Reckoner did not appear until after Copernicus died. And surely if he had known, he would have quoted the Greek to back him up. He did not. It seems that these two great minds, Aristarchus and Copernicus, came upon the idea quite independently, two millennia apart.