The sparkling stars of Liller 1 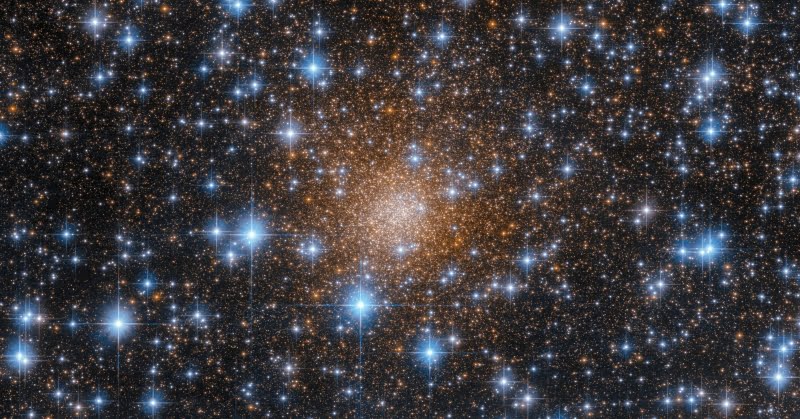 ABOVE: The reddish-coloured stars in this Hubble Space Telescope image, are members of a globular star cluster known as Liller 1. Image credit: ESA/Hubble & NASA, F. Ferraro.

AROUND 26,000 LIGHT-YEARS FROM EARTH, and close to the centre of our Milky Way galaxy (just 2,600 light-years from the core) lies a star cluster known as Liller 1.

Liller 1 is typically classified as a globular star cluster, a spherical grouping of hundreds of thousands of stars, held together within the spherical shape by their mutual gravity.

Although no-one has a firm handle on how many stars Liller 1 contains, astronomers are confident that the total mass of all those stars is about 2.3 million times that of our Sun.

(Many of Liller 1’s stars might be far more massive than the Sun, which is why you can’t directly relate the total star mass to a particular number of stars.)

Because Liller 1 is so far away, and located near the galactic core in a region known as the ‘bulge,’ it’s a bit hard to see at normal visible light wavelengths… due to intervening dust clouds that prevent a lot of the light from coming through.

But infrared wavelengths can penetrate that dust, meaning an infrared camera can do a better job of imaging it.

And that’s just what the Hubble Space Telescope’s Wide Field Camera 3 has done to produce the image seen here — a combination of data gathered at infrared and visible light wavelengths.

Liller 1 is a bit of an unusual beast. Most globular clusters comprise primarily very old stars that all formed within roughly the same epoch of the universe.

But Liller 1 has two distinct populations — stars as old as around 12 billion years, and others as young as 1 to 2 billion years.

This probably means that, for some reason, the space environment within Liller 1 remained conducive to the continual formation of stars for billions of years.