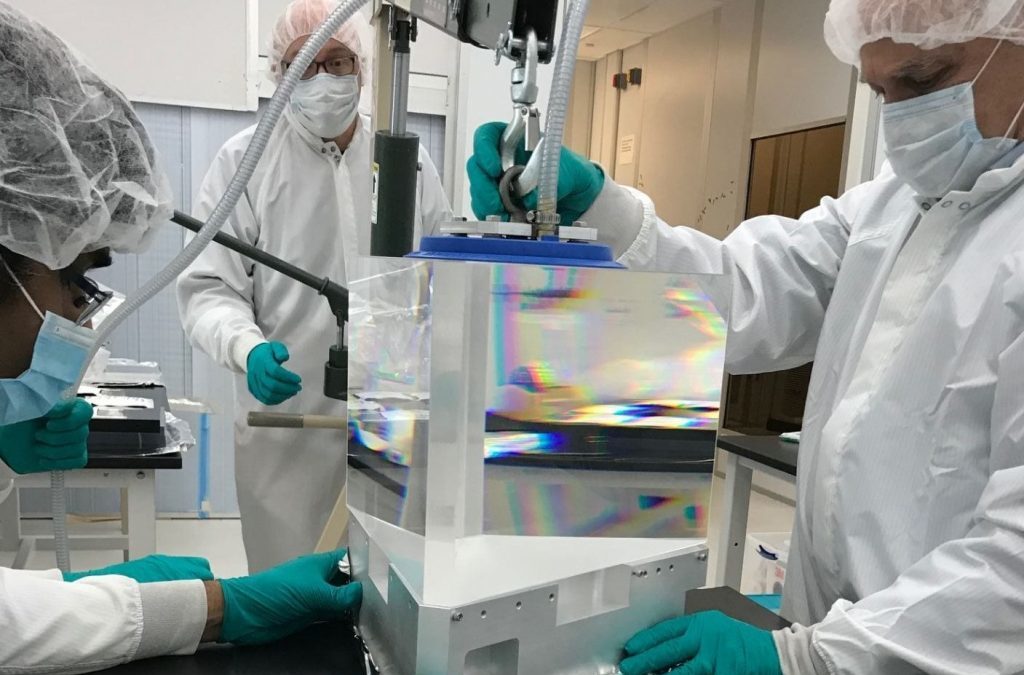 Above: NEID team members installing a large prism into the spectrometer. NEID should have three times the precision of previous radio velocity spectrometers, enabling it to discover more Earth-mass exoplanets. Courtesy the NEID team.

ASTRONOMERS HOPE A NEW HIGH-PRECISION spectrometer attached to the 3.5-metre WIYN telescope at Kitt Peak National Observatory in the US, will lead to the discovery of more Earth-mass planets.

Known as NEID, an acronym for NN-EXPLORE Exoplanet Investigations with Doppler spectroscopy, the device splits starlight into its component wavelengths. By measuring whether any wavelengths have been shifted from their normal positions, astronomers can tell if the star is being tugged this way or that by the gravity of unseen planets.

The method is known as a radial velocity measurement, and is one of the main techniques through which scientists have discovered many exoplanets, ie. those that orbit stars beyond our Solar System.

Appropriately, in the language of the Tohono O’odham Nation in the Arizona-Sonoran Desert — where the WIYN telescope is situated — the word ‘neid’ means ‘to see’.

The leader of the team that developed the special optics for NEID is Macquarie University’s Dr Christian Schwab.

Schwab and his colleagues expect NEID to have three times the precision of the previous best radial velocity spectrometers.

Starlight from WIYN’s 3.5-metre-diameter mirror is fed by optical fibre to NEID, which is housed in a special enclosure.

NEID needs to be kept at a constant temperature, so the enclosure is temperature controlled to keep the instrument stable to within a thousandth of a degree.

“The optical design for this spectrograph was challenging, as we wanted to achieve practically perfect image quality over a very broad range of wavelengths, spanning from the ultraviolet to the near-infrared part of the spectrum,” said Schwab.

“At the same time, the optics, with 300-mm diameter lenses and a very heavy, custom prism, had to be built on a fast timeline.

“We came up with a novel design that delivers excellent images with fewer lenses, which makes it easier to stabilise it to the extreme degree required by the tiny exoplanet signals,” added Schwab.

In early January, as part of its first-light observations, NEID was aimed at 51 Pegasi, the first Sun-like star confirmed (in 1995) to have an exoplanet.

“It is the first verification that NEID is measuring starlight as expected and is on its way to full functionality.”

Schwab, Wright and their colleagues are looking forward to combining NEID’s measurements with those from space observatories, such as NASA’s Transiting Exoplanet Survey Satellite.

“When we combine future NEID observations with data from spacecraft, things will really get interesting, and we will be able to learn what planets are made of,” said Wright.

“We will know the planet’s density, which is a clue to understanding how much of an atmosphere the planet has; is it gaseous like Saturn, an ice giant like Neptune, rocky like Earth, or something in between — a super-Earth or sub-Neptune?”

Schwab and his colleagues at Macquarie University are building a simpler, half-scale version of NEID for use on the university’s telescope.

The Macquarie version will produce an optical output 50% the size of that of NEID, and will not have the same thermal control system.

Funded through an internal university learning and teaching grant, it will be used to train university students in the techniques of hunting for exoplanets circling bright stars visible from the Southern Hemisphere.

A similar version is being built for use on a robotic telescope situated in South Africa.