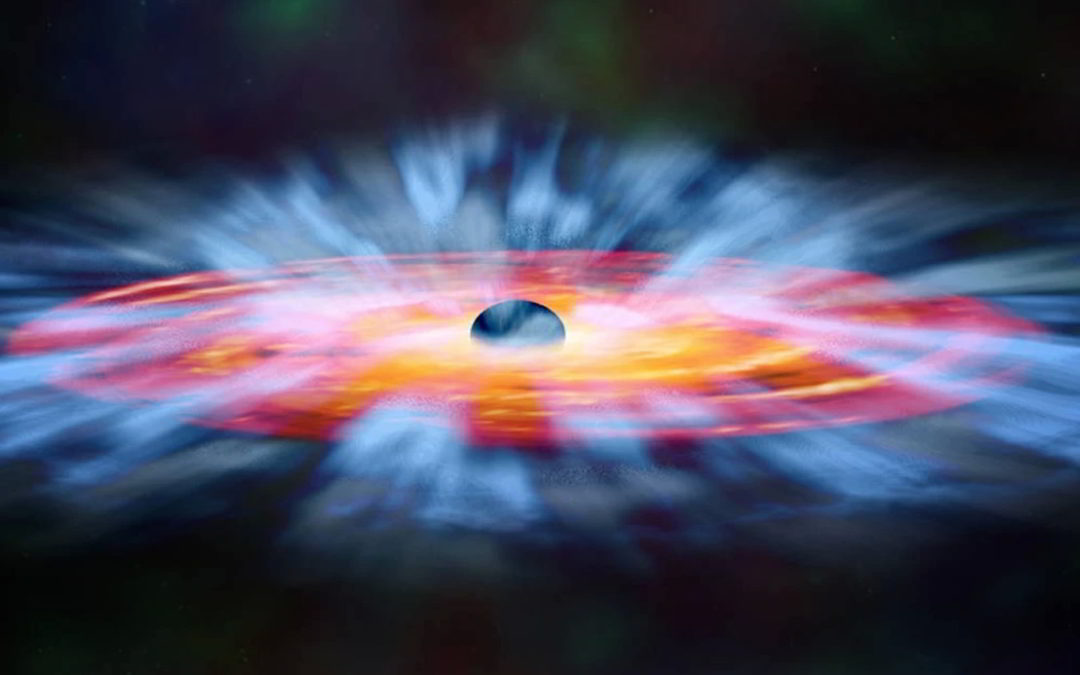 Above: An artist’s impression of gas swirling into a black hole. The Dynamic REd All-Sky Monitoring Survey (DREAMS) telescope will try to spot infrared radiation from black holes, neutron stars, quasars and many other objects in deep space.

A NEW INFRARED TELESCOPE will soon be operating at Siding Spring Observatory in north-central New South Wales. Known as the Dynamic REd All-Sky Monitoring Survey (DREAMS) telescope, the project is being led by the Australian National University (ANU) and is designed to spot short-lived, transient events in space, visible only in the Southern Hemisphere.

DREAMS is one of a new generation of fast infrared sky survey systems coming online; another is the Palomar Gattini-IR which will be located at Palomar Observatory in California and will study the northern sky. There are plans for similar systems, called Turbo Gattini-IR, to be located in the Earth’s polar regions.

According to DREAMS’ lead researcher, Professor Anna Moore, Director of the ANU Institute for Space (InSpace), this will be the first time a transient survey of the southern sky will have been done at infrared wavelengths.

“DREAMS will allow us to ‘see’ the universe in an entirely new way,” Professor Moore said.

“Infrared telescopes can study dusty and distant regions of space that are impenetrable to optical telescopes, unveiling new stars, nebulae, mergers, galaxies, supernovae, quasars and other sources of radiation new to science.

“By monitoring the sky continuously and rapidly, we will be able to search for varying and explosive phenomena. This ‘real-time’ astronomy, which allows us to study events taking place over months, weeks or days instead of millions of years, is a window into the great unknown,” she added.

“DREAMS will give us a fresh take on many aspects of the universe.”

Some other potential DREAMS investigations will be:

DREAMS will be built in-house by the InSpace and ANU team, using as many off-the-shelf components as possible. The 0.5-metre optics will feature a hyperboloid primary mirror and an aspheric secondary, along with two corrector lenses. Imaging will be done by six infrared cameras, and the entire assembly will be mounted on a pier and tracking mount aided by a levelling support.

The camera relay will comprise nine lenses and two interchangeable filters, and will convert the f/5 telescope to the required f/2 beam that shines onto the detectors. The six detectors will be Princeton Infrared Technologies SCICAM 1280 indium gallium arsenide off-the-shelf scientific units that have in-built cooling, controllers and software. They come at a fraction of the cost of the mercury cadmium telluride devices that are commonly used for these kinds of systems.

“Surveying the sky in the infrared has always been limited by the cost of the cameras and not the telescope,” said Dr Tony Travouillon, who is based at the ANU Research School of Astrophysics and Astronomy.

“The development of infrared cameras using indium gallium arsenide technology, with the help of our collaborators at MIT, has given astronomers an economical alternative that we are the first to implement on a wide field survey.”

Dr Travouillon said that having six cameras “gives us a scalable design that minimises instrument complexity and cost”.

DREAMS will be housed in the building used by the University of NSW’s Automated Patrol Telescope at Siding Spring Observatory.

The baseline survey plan for DREAMS is to scan the entire southern sky at a wavelength of 1.65 micron over a period of three nights. DREAMS will have a field of view of 3.75 square degrees (20 times the apparent size of the Moon) and a survey speed of 336 square degrees per hour. This is almost 10 times the survey speed (36 degrees per hour) of the 2MASS survey, will scanned the entire sky at infrared wavelengths between 1997 and 2001, and it’s far more than 10 times the speed of other infrared astronomy systems such as the UKIRT WFCAM, VISTA VIRCAM, CFHT WIRCAM and AST3-NIR (KISS).

DREAMS will have a real-time transient detection ‘pipeline,’ which is another way of describing the imaging and subsequent software processes to clean up the images, reject artefacts and cross-correlate will what is seen with the GAIA and 2MASS catalogues. The result will be a comprehensive database archive comprising images, light curves and photometry of sources detected.

The data collected by DREAMS will be used to enhance astronomers’ view of the cosmos at many different wavelengths, which lately has become known as ‘multi-messenger astronomy,’ as the information coming to Earth from astronomical bodies spans a wide range of wavelengths.

Thus, multi-messenger astronomy will enable “the discovery of new events by observing the sky using different wavelengths of light,” according to lead research partner, Assistant Professor Mansi Kasliwal from the California Institute of Technology (Caltech).

“By doing so it aspires to pinpoint elusive gravitational wave events,” she added. “Neutron star black hole mergers are especially exciting as they create heavy elements that shine in the infrared.”

Co-investigator Professor Orsola De Marco, from Macquarie University, hopes “the telescope will see merging stars so dusty that they shine brightly in the infrared.” She will use computer simulations to study coalescing, or merging, stars spotted by DREAM.