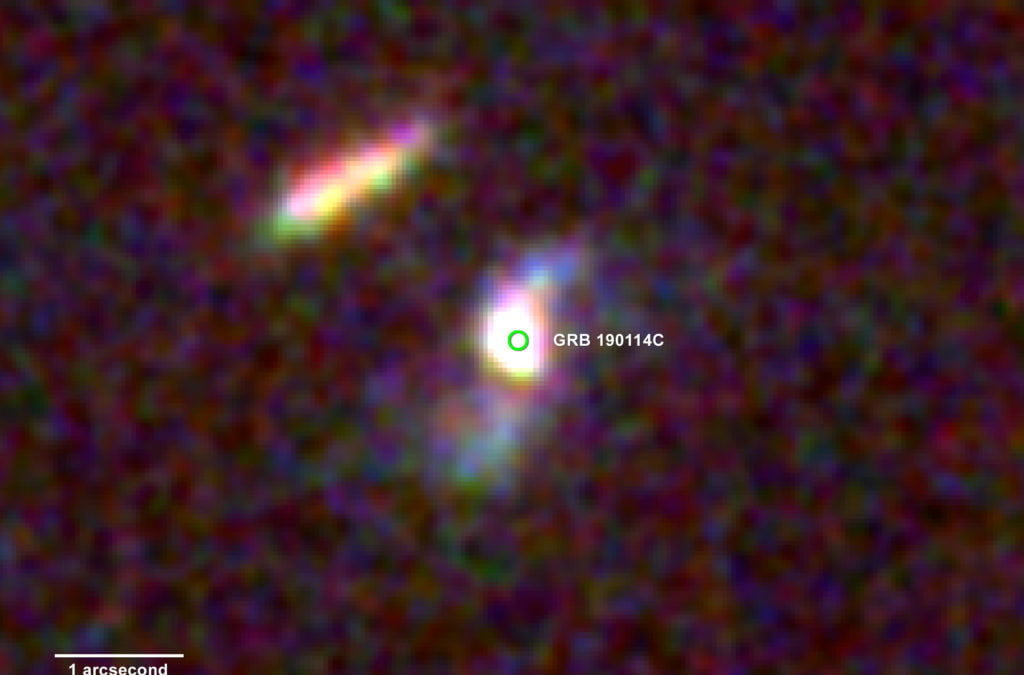 Above: The afterglow of GRB 190114C and its home galaxy were imaged by the Hubble Space Telescope on February 11 and March 12, 2019. The gamma ray burst (centre of the green circle) was located about 800 light-years from the galaxy’s core. Credit: NASA, ESA, and V. Acciari et al. 2019

On January 14, 2019, two space satellites in Earth orbit — the Neil Gehrels Swift Observatory and the Fermi Gamma-ray Space Telescope — spotted a brief but very bright flash of energy from a galaxy.

It was a gamma ray burst, one of many that have been detected over the years. But this one was soon recognised as being special… it was the most energetic detected so far.

Dr Gemma Anderson — an astronomer at the Curtin University node of the International Centre for Radio Astronomy Research, and part of the 300-strong team involved in the discovery and follow-up research — said gamma ray bursts can occur at any time, with no prior indication of their imminence.

“The bursts themselves usually only last a few seconds,” she said.

“They are likely produced by a massive star being blown apart in a supernova, with the resulting explosion leaving behind a black hole.”

“A typical burst releases as much energy in a few seconds as the Sun will in its entire 10-billion-year lifetime,” she added.

The burst was given the catalogue number GRB 190114C and, within 22 seconds of detection by the satellites, its coordinates were distributed to astronomers around the world, including the operators of the twin 64-tonne Major Atmospheric Gamma Imaging Cherenkov (MAGIC) telescopes in the Canary Islands.

“The telescopes were able to observe the burst within 50 seconds of it appearing in the sky,” he said.

In the first seconds of observing, the MAGIC telescopes detected photons from the afterglow that ranged between 0.2 and 1 teraelectron volts (TeV).

According to Dr Anderson, this is the first time such high-energy radiation has been detected from a GRB.

“It’s a trillion times more energetic than visible light,” she said. “It makes GRB 190114C the brightest known source of TeV photons in the Universe.”

GRBs leave an afterglow that can be seen by telescopes such as MAGIC for several minutes, and by radio telescopes for months or years.

Follow-up observations by telescopes around the world were used to narrow down where the burst had originated from and what its physical attributes were.

Those observations included radio wavelength studies by Dr Anderson and colleagues in Australia and around the globe, using the Australia Telescope Compact Array radio telescope network near Narrabri in northern NSW.

Dr Anderson said the initial high-energy flash was probably caused by the blast wave of the exploding star crashing into gas in the star’s environment.

“The photons probably weren’t generated in the explosion itself,” she said. The research was published on November 21 in the journal Nature.