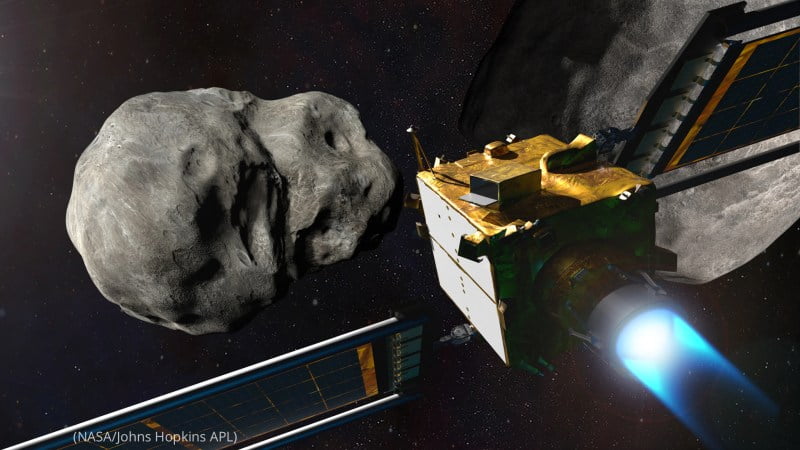 SIXTY-FIVE MILLION YEARS AGO, an asteroid collided with Earth and killed two-thirds of life on the planet, ending the reign of the dinosaurs. Now scientists at NASA and space agencies in Europe are figuring out how to prevent future asteroids from threatening humans.

“The threat of asteroids is real,” NASA scientist Elena Adams said during a panel discussion June 28 on international cooperation for planetary defence.

Adams is the systems engineer for the first planetary defence mission, known as the Double Asteroid Redirection Test (DART). The DART mission is a collaboration among NASA, the European Space Agency (ESA) and the Italian Space Agency.

NASA launched the DART mission November 24, 2021, and the spacecraft is scheduled to crash into Dimorphos, a small asteroid (160 metres in diameter) in the Didymos binary asteroid system, on September 26.

“Our goal is to go and slam into an asteroid” and change its trajectory, Adams told the US Department of State-hosted event.

The panel, which was welcomed with opening remarks by State Department Principal Deputy Assistant Secretary for the Bureau of Oceans and International Environmental and Scientific Affairs Jennifer Littlejohn, was convened in advance of the United Nations’ International Asteroid Day, June 30.

The date commemorates the anniversary of the Tunguska event, in which an asteroid hit the Earth’s atmosphere over eastern Siberia on that day in 1908.

The asteroid — an estimated 50 to 80 metres across — unleashed a force that flattened 80 million trees, destroying more than 2,000 square kilometres of forest.

Panellist Thomas Jones, chairman of the Association of Space Explorers Committee on Near-Earth Objects and a former astronaut, said the 1908 Tunguska disaster shows why space agencies, governments and scientists around the world should work to prevent asteroids from hitting Earth in the future.

“We have a chance to stop a natural catastrophe from occurring by using our cooperative skills around the planet,” he said.

Jones and other panellists said that by successfully altering the path of Dimorphos — which is not on a collision course with Earth — the DART mission would show that the international community is capable of defending against future asteroids that might threaten Earth.

With a fully autonomous navigation system, the DART satellite will hit Dimorphos while travelling at 6.6 kilometres per second.

Before impact, DART will launch the Italian Space Agency’s small satellite, called the Light Italian CubeSat for Imaging of Asteroids (LICIACube), to monitor the collision and measure DART’s effect on the asteroid.

Astronomers and scientists worldwide will also monitor for changes to the asteroid’s path and, in October 2024, the European Space Agency will launch the HERA mission to rendezvous with Dimorphos and review the effects of DART’s impact.

“This is really a momentous milestone mission because it’s really the first step of actually understanding how we can actually deflect an asteroid,” said Ettore Perozzi, of the Italian Space Agency’s Space Situational Awareness Office.

Or, as Adams said, “We’re getting back for our friends, the dinosaurs.”