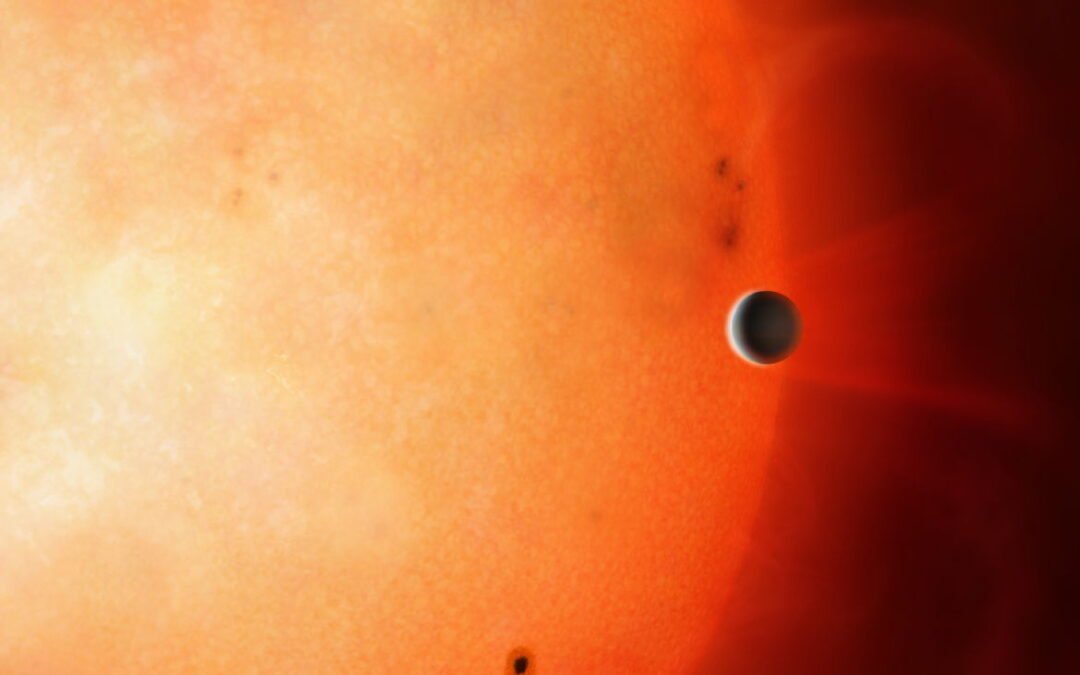 ABOVE: An artist’s impression showing a Neptune-sized planet in the ‘Neptunian Desert’. It is extremely rare to find an object of this size and density so close to its star. Credit: University of Warwick/Mark Garlick.

THE SURVIVING CORE OF A GAS GIANT PLANET has been discovered orbiting a distant star by an international team including a Perth backyard astronomer, offering an unprecedented glimpse into the interior of a planet.

The planetary core, which is the same size as Neptune in our Solar System, is believed to be a gas giant that was either stripped of its gaseous atmosphere or that failed to form one in its early life. It is located in the so-called ‘Neptunian Desert’ — a term used by astronomers for a region close to stars where we rarely detect planets of Neptune’s mass or larger.

The discovery, reported on July 2 in the journal Nature, is thought to be the first time the exposed core of a planet has been observed.

It offers the unique opportunity to peer inside the interior of a planet and learn about its composition.

Circling a star much like our own approximately 730 light-years away, the core, named TOI-849b, orbits so close to its host star that its year is a mere 18 hours and its surface temperature is around 1500 °C.

TOI-849b was found in a survey of stars by NASA’s Transiting Exoplanet Survey Satellite (TESS), using the transit method, where astronomers look for the tell-tale dip in brightness that indicates that a planet has passed in front of a star.

Follow-up observations that confirmed the planet’s discovery were made by several telescopes around the world, including one in a Perth backyard operated by retired engineer and amateur astronomer, TG Tan, who is a co-author of the study.

“It’s wonderful that someone working from a backyard in the suburbs with modest equipment can contribute to important discoveries such as this,” said Tan.

Tan has been involved in the discovery of several exoplanets, and was recently awarded the prestigious Berenice and Arthur Page Medal by the Astronomical Society of Australia.

The study determined that the object’s mass is 2 to 3 times that of Neptune but squashed into the same volume, making the planet incredibly dense.

“We would expect a planet this massive to have accreted large quantities of hydrogen and helium when it formed, growing into something similar to Jupiter. We don’t see that, telling us this is an exposed planetary core,” said lead scientist Dr David Armstrong from the University of Warwick

There are two ideas as to why we see the planet’s core, rather than a typical gas giant with a deep atmosphere. The first is that it was once similar to Jupiter but lost nearly all of its outer gas through being ripped apart by orbiting too close to its star, or through a collision with another planet.

Alternatively, it could be a ‘failed’ gas giant — a core formed but then something went wrong and it never formed an atmosphere. Perhaps there was a gap in the disc of dust that the planet formed in, or it formed late and the disc ran out of material.

“It’s a first, telling us that planets like this exist and can be found. We have the opportunity to look at the core of a planet in a way that we can’t do in our own Solar System,” said Armstrong.

“There are still big open questions about the nature of Jupiter’s core, for example, so strange and unusual exoplanets like this give us a window into planet formation that we have no other way to explore.”