Planet puzzles in nearby star system 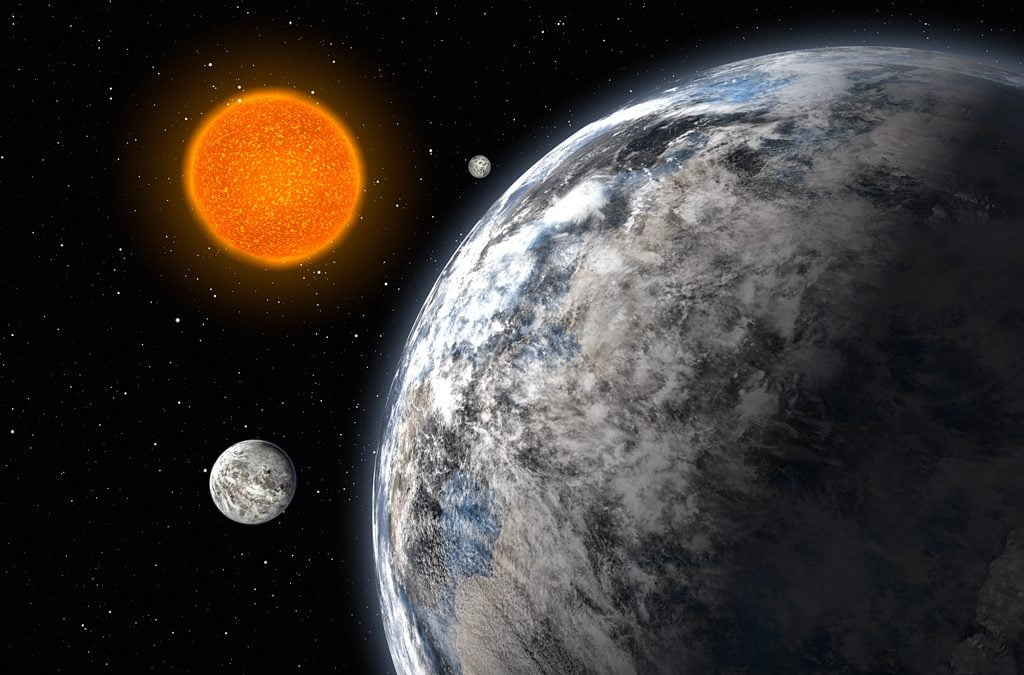 Pictured: An artist’s impression of the trio of super-Earths discovered by a European team using the HARPS spectrograph on the ESO 3.6-metre telescope at La Silla, Chile, after 5 years of monitoring. The three planets, having 4.2, 6.7, and 9.4 times the mass of the Earth, orbit the star HD 40307 with periods of 4.3, 9.6, and 20.4 days, respectively. Credit: ESO.

A star about 100 light-years from Earth, called GJ 9827, hosts what may be one of the most massive and dense super-Earth planets detected to date according to new research led by the Carnegie Institution for Science’s Johanna Teske.

This new information provides evidence to help astronomers better understand the process by which such planets form.

The GJ 9827 star actually hosts a trio of planets, discovered by NASA’s exoplanet-hunting Kepler/K2 mission, and all three are slightly larger than Earth. This is the size that the Kepler mission determined to be most common in the galaxy with periods between a few and several-hundred days.

Intriguingly, no planets of this size exist in our Solar System. This makes scientists curious about the conditions under which they form and evolve.

One important key to understanding a planet’s history is to determine its composition. Are these super-Earths rocky like our own planet? Or do they have solid cores surrounded by large, gassy atmospheres?

To try to understand what an exoplanet is made of, scientists need to measure both its mass and its radius, which allows them to determine its bulk density.

When quantifying planets in this way, astronomers have noticed a trend. It turns out that planets with radii greater than about 1.7 times that of Earth have a gassy envelope, like Neptune, and those with radii smaller than this are rocky, like our home planet.

Some researchers have proposed that this difference is caused by photoevaporation, which strips planets of their surrounding envelope of so-called volatiles — substances like water and carbon dioxide that have low boiling points — creating smaller-radius planets. But more information is needed to truly test this theory.

Luckily, teams of Carnegie scientists including co-authors Steve Shectman, Sharon Wang, Paul Butler, Jeff Crane, and Ian Thompson have been monitoring GJ 9827 with their Planet Finding Spectrograph (PFS), so they were able to constrain the masses of the three planets with data in hand, rather than having to scramble to get many new observations of GJ 9827.

“Usually, if a transiting planet is detected, it takes months if not a year or more to gather enough observations to measure its mass,” Teske explained. “Because GJ 9827 is a bright star, we happened to have it in the catalogue of stars that Carnegie astronomers been monitoring for planets since 2010. This was unique to PFS.”

The spectrograph was developed by Carnegie scientists and mounted on the Magellan Clay Telescopes at Carnegie’s Las Campanas Observatory.

The PFS observations indicate that planet b is roughly eight times the mass of Earth, which would make it one of the most-massive and dense super-Earths yet discovered. The masses for planet c and planet d are estimated to be about two and a half and four times that of Earth respectively, although the uncertainty in these two determinations is very high.

“More observations are needed to pin down the compositions of these three planets,” Wang said. “But they do seem like some of the best candidates to test our ideas about how super-Earths form and evolve, potentially using NASA’s upcoming James Webb Space Telescope.”

Adapted from information issued by the Carnegie Institution for Science.