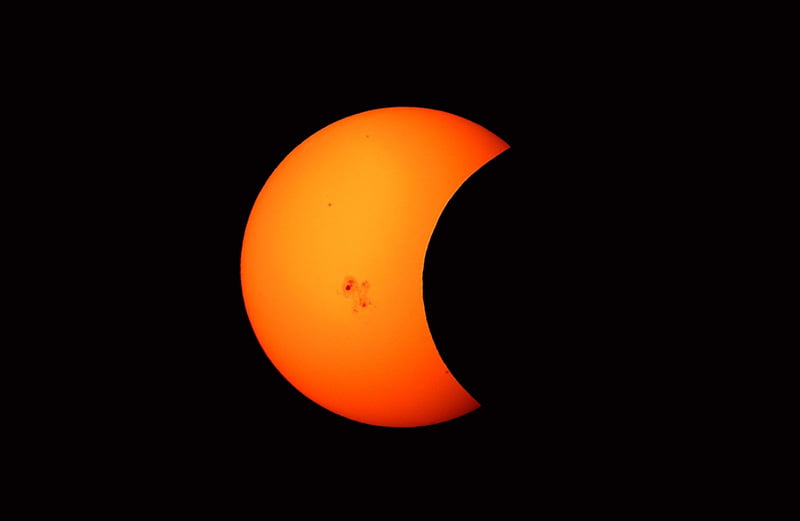 Above: Observers in Darwin will see around 43% of the Sun’s diameter covered up by the Moon. Image courtesy Joshua Tree National Park.

Amateur astronomers in the northern of Australia will witness a partial solar eclipse on December 26.

The event will actually be an annular solar eclipse, so-called because the Moon will not entirely cover the face of the Sun at maximum but leave a thin ring or annulus of sunlight visible for those who happen to be in the right place to see it.

This happens because the Moon’s orbit is elliptical — when it is closer it appears bigger and is able to fully cover the Sun; when it’s further away it appears smaller, and an annular eclipse is the result.

On December 26 the path of annularity will sweep across the Earth from the Middle East to South-East Asia, with Australia unfortunately missing out on seeing this ‘ring of fire’.

However, all is not lost, as much of western and northern Australia will see a partial eclipse instead.

Draw an imaginary line across the continent from Proserpine in Queensland all the way to just north of Perth — everywhere north of that line will see at least some of the Sun covered by the Moon.

Darwin will be best placed, with around 43% of the Sun’s diameter gobbled up by the Moon at the point of maximum eclipse. The table gives timings for major cities.

Before going any further, it is incumbent upon us to reiterate the standard warning about solar observations — staring at the Sun with the naked eye can damage your eyesight; using optical aid such as a telescope can instantly blind you.

There are only two safe ways to observe the Sun — the first is to the use the projection method; the second is to use a professionally manufactured solar filter or solar telescope.

Homemade filters are dangerous and cannot be relied upon. Here’s a good online resource with solar safety tips: https://www.nsc.org/home-safety/tools-resources/seasonal-safety/solar-eclipse.

The next total solar eclipses for Australasia will be in April 2023 — when the path of totality will just clip the coast of Western Australia near Exmouth — and the big one in July 2028, when totality will sweep right across Australia from the North West Cape all the way to Sydney and then out over the Tasman Sea to Dunedin in New Zealand.