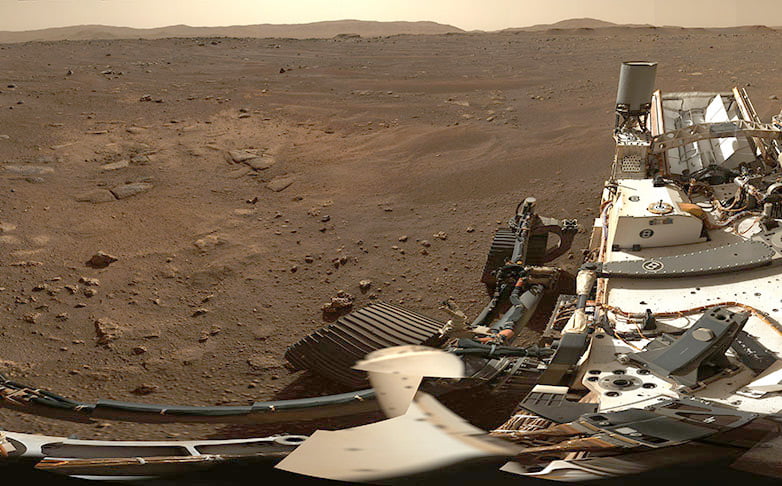 ABOVE: Part of Perseverance’s new high-definition panoramic image of its landing site on Mars.

NASA has released a new high-definition panoramic image from the Mars 2020 Perseverance rover, as the wheeled craft prepares to start exploring its new home.

Perseverance took a series of 142 images as it rotated its mast or ‘head’ 360 degrees.

The mast carries the Mastcam-Z instrument, which is a dual-camera system that can take detailed still and 3D images as well as high-definition video.

Mastcam-Z can see details as small as 3 to 5 millimetres close to the rover and 2 to 3 metres at the horizon.

A close-up view of a wind-carved rock near Perseverance’s landing site.

It looks like mountain range in a desert here on Earth, but it’s actually the rim of Jezero Crater on Mars.

Perseverance’s initial photos from its landing site within Jezero Crater show a landscape similar to those returned by previous craft that have landed on Mars.

“We’re nestled right in a sweet spot, where you can see different features similar in many ways to features found by Spirit, Opportunity, and Curiosity at their landing sites,” said Jim Bell of Arizona State University’s School of Earth and Space Exploration, and the camera’s principal investigator.