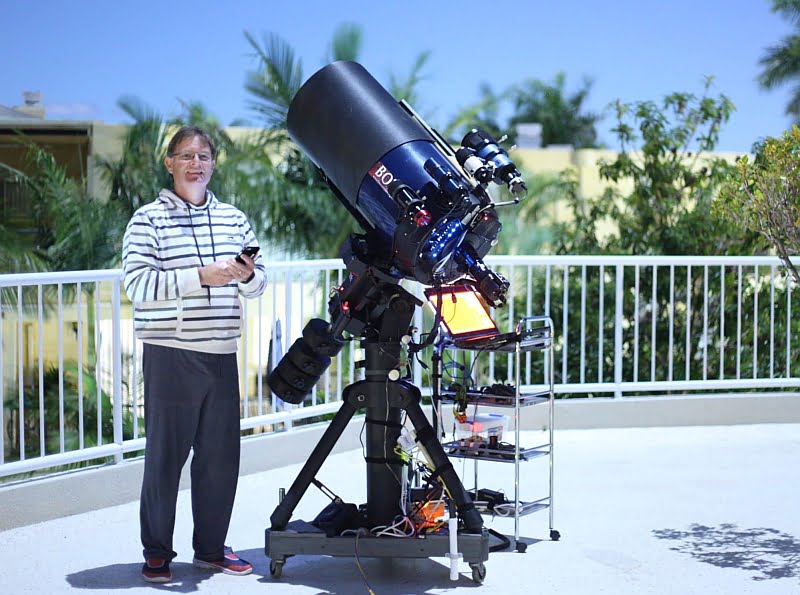 ABOVE: Greg Bock is a member of the award-winning The Backyard Observatory Supernova Search, which hunts for distant supernovae.

The presentation was made online on Saturday 16 April during the National Australian Convention of Amateur Astronomers.

Normally, the Page Medal is awarded to an individual, but this year the judges from the Astronomical Society of Australia (ASA) — the nation’s body of professional astronomers — decided that two recipients should be recognised for their work.

The first recipient comprises a group of six friends who make up The Backyard Observatory Supernova Search (BOSS) Team monitor distant galaxies to detect the death throes of massive stars as they explode in brilliant supernovae.

The team then alerts professional telescopes to swing into action and study these phenomena at the crucial moment.

The sooner those observations begin, the more is learnt about the lead up to the star’s final moments.

Without supernovae shedding their material across space, there wouldn’t have been any ingredients available for life or even for planets like the Earth to develop.

The BOSS Team makes its observations from the members’ backyards in Brisbane, on the Gold Coast and from a dairy farm near Christchurch, New Zealand.

The second recipient is former mine worker Trevor Barry, who in 2008 detected a ‘white spot’ on Saturn, which turned out to be an electrical storm.

“The CASSINI space craft orbiting Saturn couldn’t image the storm on a day-to-day basis, due to its orbit and other priorities. [But] I could,” said Trevor.

The storm swirled for seven months, making it the longest-lived storm ever recorded on Saturn.

Trevor is also highly regarded for his series of observations of Saturn’s North Polar Hexagon, taken over a period of 3,115 Earth days.

According to the ASA’s citation of Trevor for the award of the Page Medal, his work on “the differential rotation of the polar hexagon on Saturn gives a greater handle on the internal atmospheric dynamics. This is careful work, and it complements spacecraft measurements. Trevor’s work is widely known and highly regarded by NASA.”

“The difference and contribution that Trevor makes is the ability to almost continuously observe Saturn and analyse dynamic process over hours, days and weeks. This is something HST or satellite missions cannot do.”

Trevor continues to provide storm data to NASA and others about Saturn, Jupiter and Mars.

The Page Medal is awarded every two years by the Astronomical Society of Australia (ASA) to recognise scientific contributions that have advanced the field of astronomy. It was established to honour Berenice and Arthur Page, a wife-and-husband team who were amateur pioneers of astronomy in Australia and foundation members of the ASA.

ASA President Professor John Lattanzio said that this year’s winners demonstrate the scientific value of amateurs who can continuously observe their targets.

“Professional telescopes have their time fully allocated, plotted minute by minute, months in advance. Whereas these dedicated and highly skilled amateurs can monitor their targets on the chance something interesting happens — and that’s where the value lies,” said John.

“The winners are truly outstanding and well-deserving, and it was impossible to differentiate between their contribution to advancement of astronomy. Hence, the decision to make two awards for the first time in the prize’s history,” he says.

Trevor Barry says he’ll keep watching Saturn for as long as he’s alive. “I’m waiting for the next big thing to happen, because Saturn can be a bit staid. It’s not rambunctious like Jupiter,” he said.

“I’m so honoured by this award. It’s the highest honour that the peak professional body in Australia can bestow on an amateur. It’s humbling to me,” says Trevor.