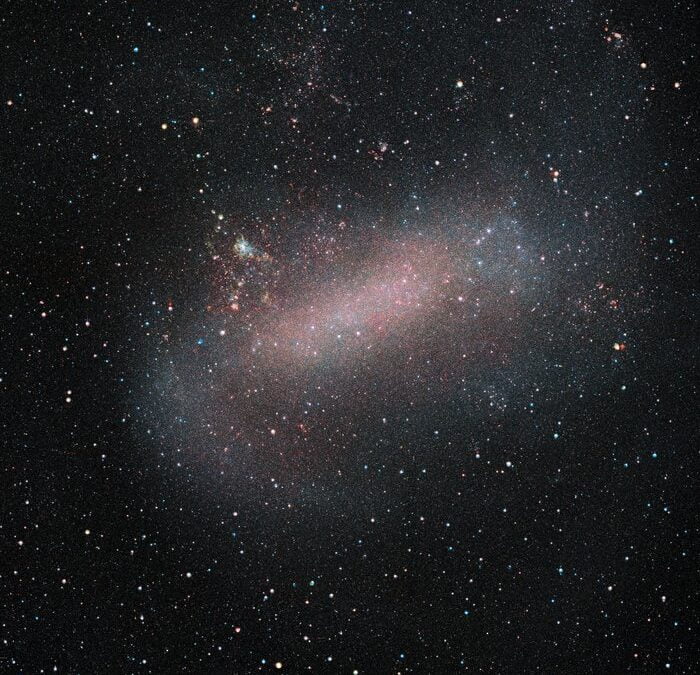 Above: This new view of the Large Magellanic Cloud (LMC) was made using the European Southern Observatory’s (ESO) VISTA telescope. The LMC can be glimpsed with the naked eye by observers in the Southern Hemisphere. Credit: ESO/VMC Survey

A favourite of Southern Hemisphere stargazers, the Large Magellanic Cloud (LMC) galaxy is perfectly placed mid- to late-evening viewing during the spring and summer months.

The LMC is one of the nearest galaxies to our own Milky Way, located about 163,000 light-years from Earth.

The LMC’s smaller sibling, the Small Magellanic Cloud, is a bit further away at 200,000 light-years.

Even though both galaxies have been known since antiquity to those who lived far enough south to see them, the LMC and SMC were eventually named for the 16th century explorer, Ferdinand Magellan, who spotted them during his famous voyage.

The image above was made using the European Southern Observatory’s (ESO) VISTA telescope.

VISTA, or the Visible and Infrared Survey Telescope for Astronomy, is a wide-field telescope with a 4.1-metre-diameter primary mirror.

The telescope is located at ESO’s Paranal Observatory in Chile.

Scientists have been using VISTA to survey the LMC and SMC in great detail for the past 10 years, with the aim of studying stellar evolution, stellar motion within the galaxies, as well as the behaviour of variable stars.

VISTA’s ability to pick up infrared radiation enables it to ‘see through’ LMC dust clouds that hide stars from view at visible light wavelengths.

The astronomers have analysed the light from around 10 million individual stars in the LMC and used stellar evolution models to determine their ages. They found that the galaxy’s spiral arms contain many younger stars.

Use the diagram below to spot the LMC. You’ll need dark skies away from sources of artificial light such as streetlights, and you’ll also need to allow time for your eyes to adapt to the dark. The LMC looks just like a faint, fuzzy cloud.