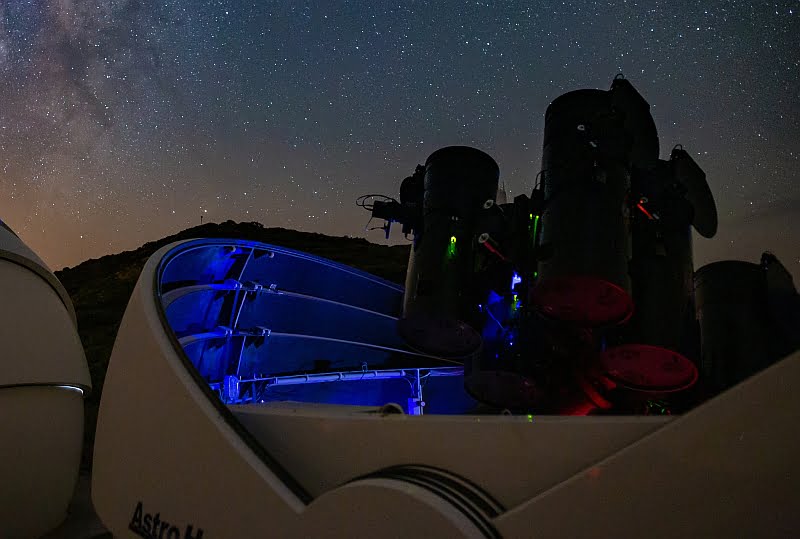 ABOVE: A GOTO system (like this version in the Canary Islands) will soon begin operating in Australia.

A NEW TELESCOPE SYSTEM designed to help in the hunt for the origins of gravitational waves will soon start operating in Australia. To be situated at Siding Spring Observatory in NSW, the Gravitational-wave Optical Transient Observer (GOTO), led by the UK’s University of Warwick, will look for flashes of light associated with events that produce gravitational disturbances… such as the merger of black holes.

Many such gravitational events have been detected in recent years since the Advanced Laser Interferometry Gravitational-Wave Observatory (LIGO) began operating in 2015. But astronomers want to pinpoint the exact locations and objects involved in the detections, which means they need to ‘see’ them at electromagnetic wavelengths.

That’s where GOTO comes in. The system will comprise two sites, one at La Palma in the Canary Islands and the other at Siding Spring. Each location will have sixteen 40-cm telescopes, piggybacked to produce a very large field of view; combined, their digital sensors will have 800 million pixels.

The system will be capable of picking up the brief, faint flashes of light from events such as black hole or neutron star mergers, enabling other, larger telescopes to immediately swing into action to hunt down their sources.

The international collaboration has 10 partners, including Australia’s Monash University, and has received £3.2 million in funding from the UK’s Science and Technology Facilities Council. The two sites will be up and running and ready for the next observing run of the LIGO and Virgo gravitational wave detectors in 2023.

“This is really encouraging from an international co-operation perspective, that the UK is willing to support this project, with new telescopes to be built in Australia,” said Associate Professor Duncan Galloway, from the Monash University School of Physics and Astronomy.

“The new site gives us a massive improvement in our chance to observe the counterparts of gravitational wave detections. Detecting the optical counterparts promptly is a key factor in how much we can learn…,” he added. “The first such event, GW170817, was identified in 11 hours; but our GOTO network can be on sky and autonomously observing the field within minutes.”