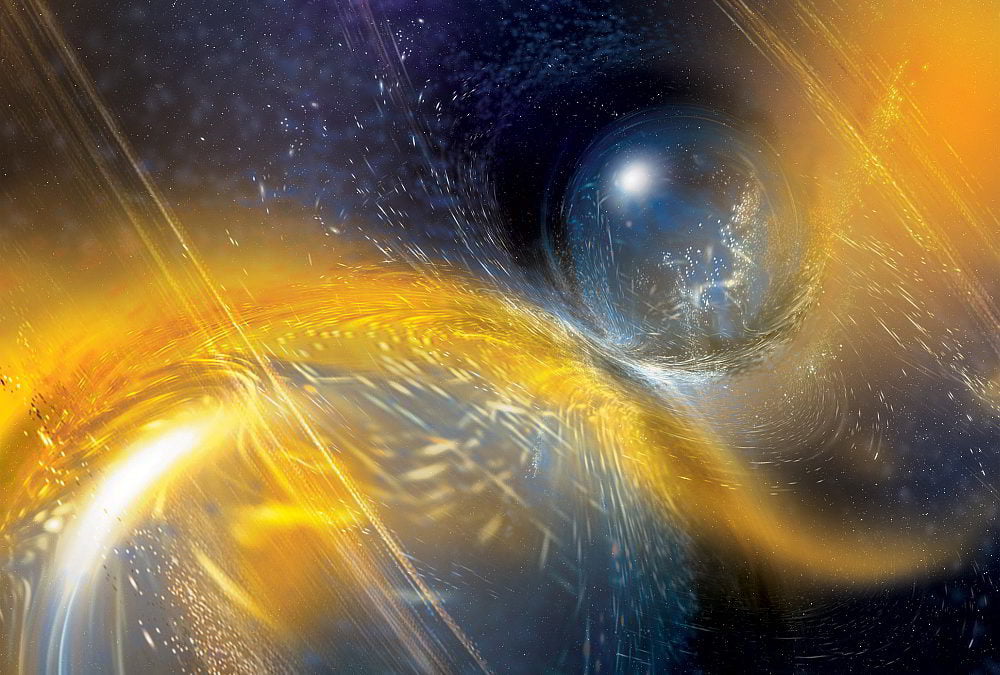 Above: Artist’s impression of the binary neutron star merger producing GW190425, thought to have resulted in the formation of a black hole. See the video below for a better understanding. Credit: National Science Foundation/LIGO/Sonoma State University/A. Simonnet.

FOR ONLY THE SECOND TIME, SCIENTISTS HAVE DETECTED what they think are the gravitational shockwaves from a collision between two neutron stars.

Neutron stars are the super-dense core remnants left behind when certain massive stars both explode and implode at the end of their lives.

A typical neutron star has a mass of around 1.4 times that our Sun, yet squashed into a sphere only approximately 20 kilometres across. (The Sun is almost 1.4 million kilometres in diameter.)

Occasionally, two such neutron stars will come close to each other and collide, with a single, merged body being the result.

The detection used the gravitational wave detectors LIGO (in the USA) and Virgo (Italy), with the research being a collaboration of many international teams.

One of the organisations involved is Australia’s ARC Centre of Excellence for Gravitational Wave Discovery (OzGrav).

“This event is a perfect example of how gravitational-wave astronomy is a completely new and unique way of looking at the Universe,” said OzGrav postdoctoral researcher, Simon Stevenson.

The gravitational wave data gave the scientists enough information to calculate the masses, spins, and orientations of the two neutron stars.

And they were surprised by one thing — how much initial combined mass the two bodies had, about 3.4 times that of the mass of the Sun.

“The combined mass of the merging objects is surprisingly high, much greater than any previously known double neutron star binaries including the one detected in 2017,” said OzGrav postdoctoral researcher Xingjiang Zhu.

Neutron star collisions have been thought to typically occur only between pairs of neutrons stars with a total mass up to about 2.9 times that of the Sun.

It’s possible that the collision involved not two neutron stars, but a neutron star and a black hole. (Black holes have more mass than neutron stars.)

But, the scientists say, for this to be the case, the black hole would have to have been unusually small.

For this reason, they think it is more likely that the event involved two neutron stars and that the merger resulted in a newly formed black hole.

“This detection manifests the importance of continued improvement of the already amazingly sensitive gravitational wave detectors, as this event would not have been observable prior to the latest upgrades,” said OzGrav postdoctoral researcher, Vaishali Adya.

“OzGrav played a vital role in these upgrades, one of which involved reducing the quantum noise in the detectors,” added Adya.

“Additional exciting and unexpected discoveries can be expected as the sensitivity of the LIGO detectors improves,” said Professor Peter Veitch, University of Adelaide OzGrav Node Leader.

“OzGrav is working closely with LIGO to improve their sensitivity, developing new instrumentation and analysis techniques.”