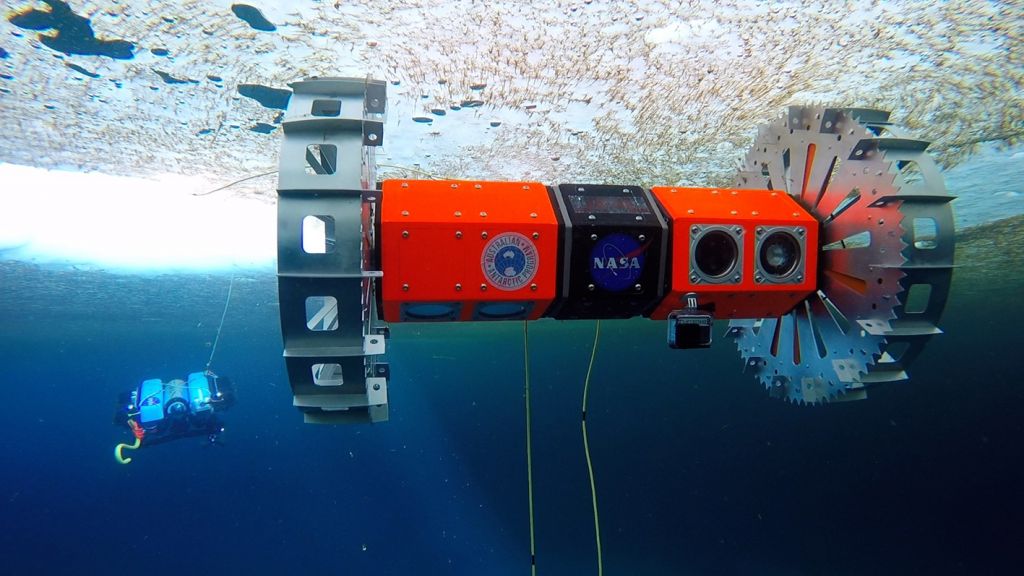 A PROTOTYPE OF A ROBOT designed to explore underneath the ice crust of Jupiter’s moon Europa, has been tested at Australia’s Casey research station in Antarctica.

The two-wheeled robot is designed to roam the underside of the ice sheet, held in place by its buoyancy and propelled by the wheels.

According to NASA scientist from the Jet Propulsion Laboratory, Dr Kevin Hand, the Antarctic mission was a huge success.

“We put the robot under the sea-ice on four occasions and were able to test its full mechanical capabilities,” said Dr Hand.

“We even left it hanging out under the ice for a 48-hour sleep-over,” he said.

“What we saw was just stunning, the sea-ice algae dangling down like little chandeliers, carpets of thick algae communities and gas bubbles under the ice.”

The robot has a range of science instruments to take samples of the ice-water interface, and was able to collect a range of valuable data during its test runs.

“The under-side of the ice was quite flat, so the robot could roam about amassing information on dissolved oxygen, conductivity, temperature and depth,” said NASA Lead Engineer, Dr Andy Klesh.

The researchers will use the results of the tests to make improvements to the design of the robot.

“We learned from navigating some of the cracks that an additional wheel, like a tricycle, might be useful as well as adding thrusters to it, so we could vary our buoyancy when needed,” Dr Hand said.

NASA aims to send a robotic mission to Jupiter within the next decade to study the planet and explore one of its icy moons, Europa.

Europa has a 10 kilometre-thick ice crust, under which is thought to be a deep, salty ocean that could be a habitat for life.