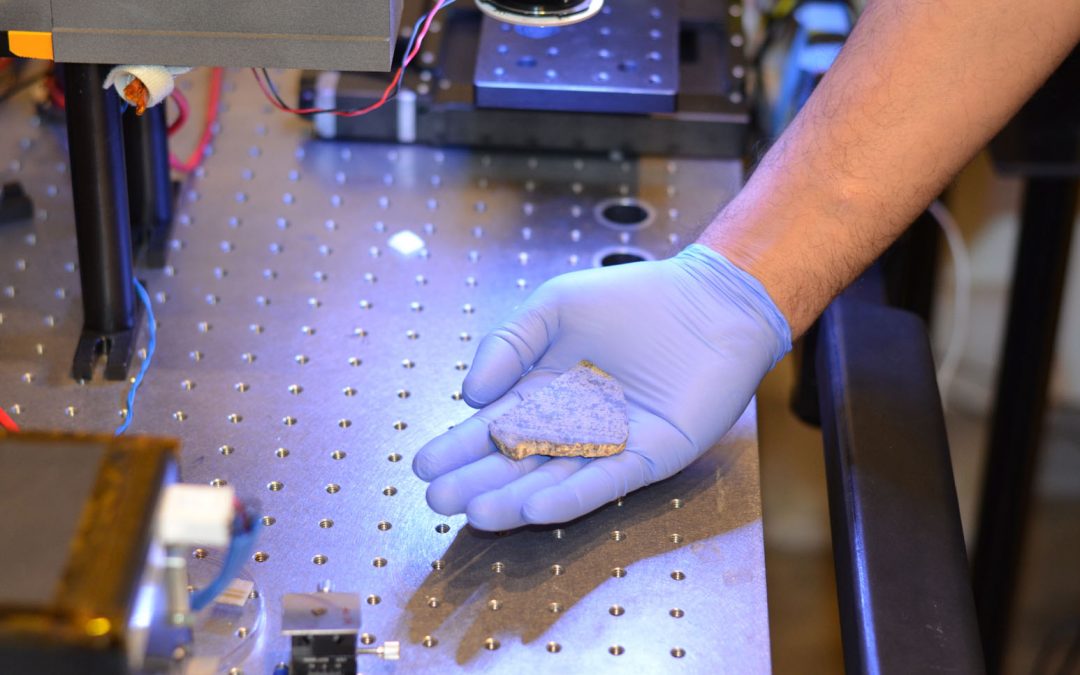 Rohit Bhartia of NASA’s Mars 2020 mission holds a slice of a meteorite scientists have determined came from Mars. One of two slices will be used for testing a laser instrument for NASA’s Mars 2020 rover while it’s still on Earth; the other slice will go to Mars aboard the rover. Image Credit: NASA/JPL-Caltech

A piece of a meteorite called Sayh al Uhaymir 008 (SaU008) will be carried on board NASA’s Mars 2020 rover mission, now being built at the agency’s Jet Propulsion Laboratory in Pasadena, California.

The chunk will serve as target practice for a high-precision laser on the rover’s arm.

Mars 2020’s goal is ambitious — collect samples from the Red Planet’s surface that a future mission could potentially return to Earth. One of the rover’s many tools will be a laser designed to illuminate rock features as fine as a human hair.

That level of precision requires a calibration target to help tweak the laser’s settings. Previous NASA rovers have included calibration targets as well. Depending on the instrument, the target material can include things like rock, metal or glass, and can often look like a painter’s palette.

But working on this particular instrument sparked an idea among JPL scientists — why not use an actual piece of Mars?

Earth has a limited supply of Martian meteorites, which scientists determined were blasted off Mars’ surface millions of years ago.

These meteorites aren’t as unique as the geologically diverse samples 2020 will collect. But they’re still scientifically interesting — and perfect for target practice.

“We’re studying things on such a fine scale that slight misalignments, caused by changes in temperature or even the rover settling into sand, can require us to correct our aim,” said Luther Beegle of JPL.

Beegle is principal investigator for a laser instrument called SHERLOC (Scanning Habitable Environments with Raman and Luminescence for Organics and Chemicals).

“By studying how the instrument sees a fixed target, we can understand how it will see a piece of the Martian surface.”

SHERLOC will be the first instrument on Mars to use Raman and fluorescence spectroscopies, scientific techniques familiar to forensics experts. Whenever an ultraviolet light shines over certain carbon-based chemicals, they give off the same characteristic glow that you see under a black light.

Scientists can use this glow to detect chemicals that form in the presence of life. SHERLOC will photograph the rocks it studies, then map the chemicals it detects across those images. That adds a spatial context to the layers of data Mars 2020 will collect. Close-up of a slice of SaU008, a meteorite scientists have determined came from Mars. Image Credit: NASA/JPL-Caltech

Martian meteorites are precious in their rarity. Only about 200 have been confirmed by The Meteoritical Society, which has a database listing these vetted meteorites.

To select the right one for SHERLOC, JPL turned to contacts at NASA’s Johnson Space Center in Houston, as well as the Natural History Museum of London. Not just any Martian meteorite would do — its condition would need to be solid enough that it would not flake apart during the intensity of launch and landing.

It also needed to possess certain chemical features to test SHERLOC’s sensitivity. These had to be reasonably easy to detect repeatedly for the calibration target to be useful.

Experts tried several samples, cutting off thin bits to test whether they would crumble. Using a “flaky” sample could damage the entire meteorite in the process.

The SHERLOC team ultimately agreed on using SaU008, a meteorite found in Oman in 1999. Besides being more rugged than other samples, a piece of it was available courtesy of Caroline Smith, principal curator of meteorites at London’s Natural History Museum.

“Every year, we provide hundreds of meteorite specimens to scientists all over the world for study,” Smith said. “This is a first for us — sending one of our samples back home for the benefit of science.”

SaU008 will be the first Martian meteorite to have a fragment return to the planet’s surface — though not the first on a return trip to Mars.

NASA’s Mars Global Surveyor included a chunk of a meteorite known as Zagami. It’s still floating around the Red Planet aboard the now-defunct orbiter.

Additionally, the team behind Mars2020’s SuperCam instrument will be adding a Martian meteorite to their own calibration target. A slice of SaU008 is placed inside an oxygen plasma cleaner, which removes organics from the outside of surfaces. Image Credit: NASA/JPL-Caltech

Preparing for humans on Mars

Along with its own Martian meteorite, SHERLOC’s calibration target will include several interesting scientific samples for human spaceflight. These include materials that could be used to make spacesuit fabric, gloves and a helmet’s visor.

By watching how they hold up under Martian weather, including radiation, NASA will be able to test these materials for future Mars missions.

“The SHERLOC instrument is a valuable opportunity to prepare for human spaceflight as well as to perform fundamental scientific investigations of the Martian surface,” said Marc Fries, a SHERLOC co-investigator and curator of extraterrestrial materials at Johnson Space Center.

“It gives us a convenient way to test material that will keep future astronauts safe when they get to Mars.”

Adapted from information issued by JPL.