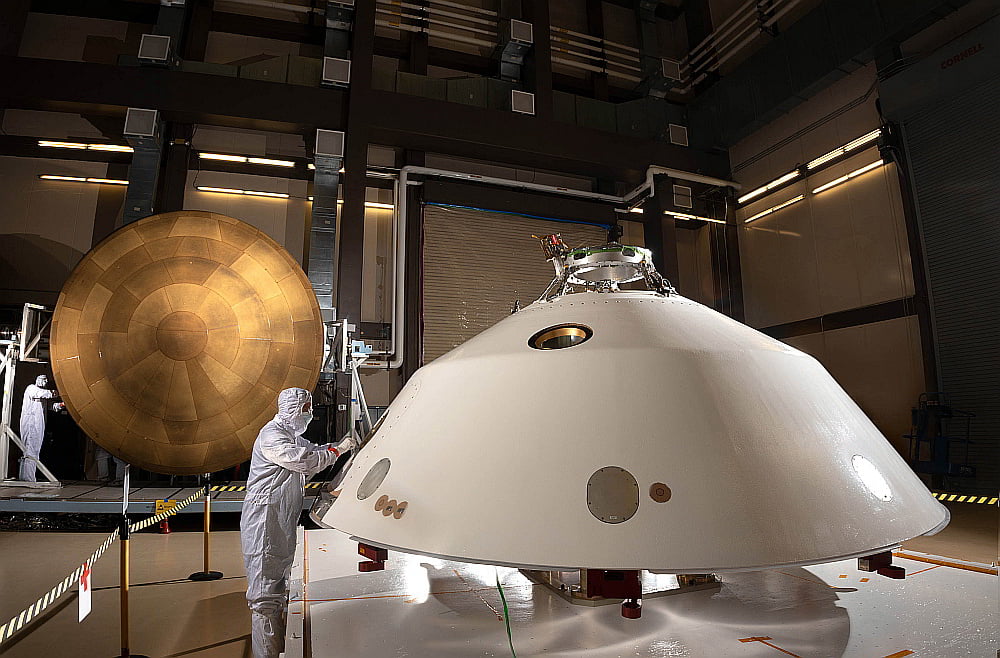 Above: The aeroshell and heat shield for the Mars 2020 mission. Image courtesy Lockheed Martin.

The contraption in the foreground of this image looks a bit like the Jupiter 2 spaceship from the TV series Lost in Space, but it is in fact part of the aeroshell for the Mars 2020 rover.

The aeroshell will cover the rover and its descent system, protecting it from the cold vacuum of space during the flight to Mars as well as from the intense heat during entry into the planet’s atmosphere.

In the background of the image is the heatshield, which comprises tiles of Phenolic Impregnated Carbon Ablator material, which will protect the craft from temperatures of up to 2,100 degrees Celsius.

“Even though we have the experience of building the nearly identical aeroshell for the Curiosity Rover, the almost 15-foot [4.5-metre] diameter composite structure was just as big a challenge to build and test 10 years later,” said Neil Tice, Mars 2020 aeroshell program manager at Lockheed Martin Space.

“We’ve built every Mars aeroshell entry system for NASA of its 40 years of exploring Mars, so we pulled from that experience to build this important system.”

Mars 2020’s aeroshell/heat shield, and the similar one for the earlier Curiosity mission, are the largest ever made for planetary missions.

The heat shields for the Apollo lunar spacecraft were a little less than 4 metres in diameter.

A package called the MSL Entry Descent and Landing Instrument (MEDLI2) has been attached to the heat shield and aeroshell — it will collect pressure and temperature data during the craft’s plunge through the Martian atmosphere.