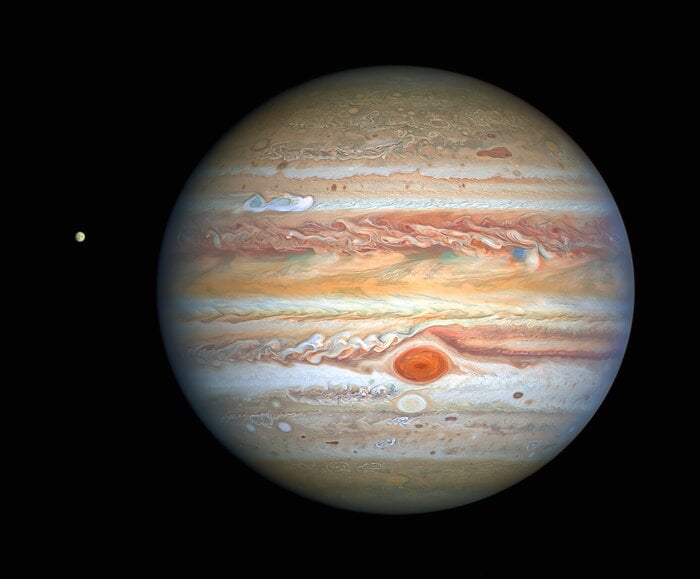 Above: Jupiter and its Great Red Spot, with the moon Europa on the left. The image was taken by the Hubble Space Telescope on 25 August 2020, when the planet was 653 million kilometres from Earth. Image credit: NASA, ESA, A. Simon (Goddard Space Flight Center), and M. H. Wong (University of California, Berkeley) and the OPAL team.

ASTRONOMERS HAVE FOUND THAT THE WIND in the ‘outer lane’ of Jupiter’s Great Red Spot (GRS) is moving faster than that of its ‘inner lane’ — and it continues to pick up speed.

By analysing more than 10 years of regular GRS observations by the Hubble Space Telescope, the researchers have found that the wind speed increased by up to 8 percent between 2009 and 2020.

“When I initially saw the results, I asked ‘Does this make sense?’ No one has ever seen this before,” said Michael Wong of the University of California, Berkeley, who led the analysis.

The change in wind speed amounts to less than 2.5 kilometres per hour per Earth year.

“We’re talking about such a small change that if we didn’t have eleven years of Hubble data, we wouldn’t know it had happened,” said Amy Simon of NASA’s Goddard Space Flight Center.

“With Hubble we have the precision we need to spot a trend.”

The smallest features Hubble can reveal within the storm are a mere 170 kilometres across.

Wong says he’s not sure what is driving the increase in wind speed “since Hubble can’t see the bottom of the storm very well. Anything below the cloud tops is invisible in the data”.

“But it’s an interesting piece of the puzzle that can help us understand what’s fuelling the Great Red Spot and how it’s maintaining its energy,” he said.

The GRS has been shrinking in size and becoming more circular than oval over the last century. The current diameter is 16,000 kilometres across, meaning that Earth could fit inside it. Its clouds spin counter clockwise at speeds of more than 640 kilometres per hour.