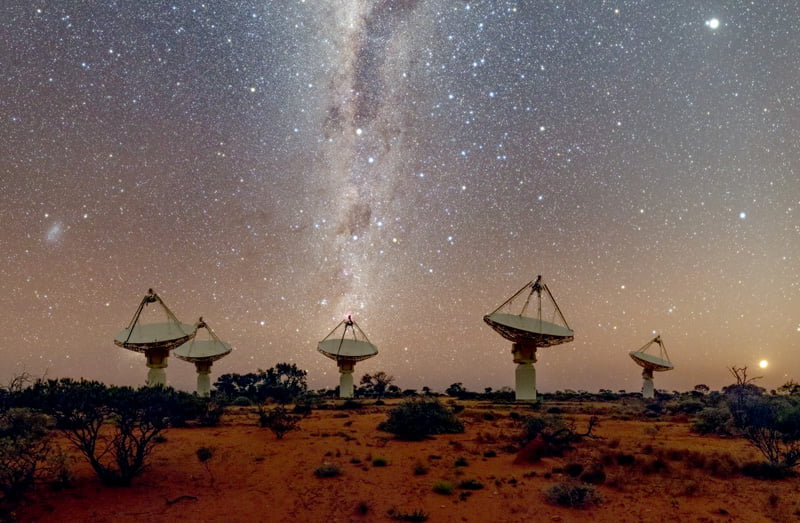 ABOVE: Some of the dishes of the CSIRO’s ASKAP radio telescope array in Western Australia. ASKAP is located at the Murchison Radio-astronomy Observatory site, the traditional owners of which are the Wajarri Yamaji.

Scientists who were the first to pinpoint the location of a ‘fast radio burst’ (FRB) in a distant galaxy have been rewarded with a prestigious prize.

The team of 54 astronomers, led by CSIRO astronomer Dr Keith Bannister, has been awarded the 2020 AAAS Newcomb Cleveland Prize for the best science paper of the year by the scientific journal, Science.

The researchers used the CSIRO’s Australian Square Kilometre Array Pathfinder (ASKAP) radio telescope, a network of 36 antennas in Western Australia, to catch an FRB as it happened.

FRBs are short, intense bursts of radio emission that last just a fraction of a second. This speed is one reason why is has been very difficult for scientists to catch one in the act and work out where it was coming from — was it somewhere nearby in our galaxy, or did it come from a much farther distant galaxy?

ABOVE: Some of the members of the discovery team, with Dr Keith Bannister at top right.

What was needed was a telescope that could pick up transient events, but also one that could view enough detail to pinpoint locations accurately.

That telescope is ASKAP, which is equipped a CSIRO-designed ‘phase array feed’ system, a group of radio receivers that give the telescope a field of view 30 times wider than normal.

Not only was ASKAP used to detect the burst, but its novel ‘live action replay’ system enabled the astronomers to not miss the FRB event.

After ASKAP detected the FRB, other telescopes around the world were called into action to study it.

The result was that the team was able to confirm that the FRB did not come from within our Milky Way galaxy. Rather, it originated in a far distant galaxy, meaning that it must have been a very powerful blast to have been detected here on Earth.

“It’s thrilling to be part of cutting-edge science and technology in Australia, and to have it recognised internationally,” Dr Bannister said.