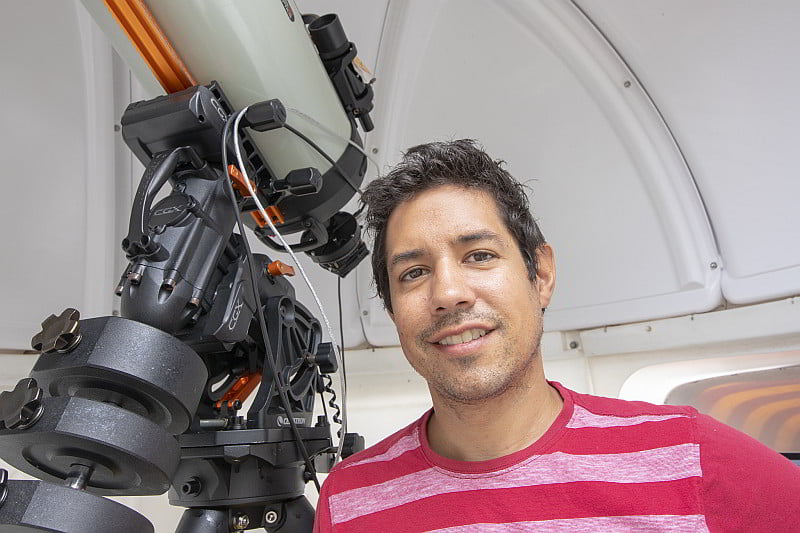 In Australian Sky & Telescope magazine we regularly profile some of the leading amateur astronomers and astrophotographers from all across Australasia. Here’s our profile of Dylan O’Donnell, who has rapidly made a name for himself in astro circles for his imaging prowess and for organising the highly successful Star Stuff festival at Byron Bay.

What got you into astronomy?

I’d always had an interest in space generally, but when I became a new parent and couldn’t play my guitar at night anymore (lest I wake the baby) I bought a $1,000 telescope on an impulse. I joined the Southern Astronomical Society and I’ve been broke ever since!

What was your first telescope set-up?

That first telescope was a Celestron 4SE which I used for lunar, solar astrophotography, visual and even a bit of wildlife photography. It’s great and very portable and I still recommend it.

What sort of gear do you use now, and why?

I very quickly became obsessed with nebulae, partly from years of admiring the images in AS&T from other amateur astronomers, which lead me to step up to an equatorial mount. Also seeing astronaut Chris Hadfield on the ISS installing a Celestron 9.25” SCT really impressed me, so now I’m using a C9.25” Edge HD on a CGX. I also used the Hyperstar reducer before I bought an 11” RASA for high-speed work.

What has been your favourite astronomical moment?

Seeing a large fireball audibly sizzle across the sky while standing alone in the dark was very memorable. I’ve only seen two big ones like that and they are both imprinted in my psyche now. But also just lying on my back under the Milky Way next to my son and talking, with no equipment whatsoever, is just as special.

What has been your proudest moment in astronomy?

Having one of my ISS transit photos go viral in mainstream media, and eventually even noticed by Chris Hadfield himself and shared from space is a hard feeling to beat! I also took a photo of Comet 252P/LINEAR passing ‘through’ the LMC that made National Geographic.

It’s funny you ask because I actually have a curated list on my computer. I’m a bit of a ‘collector,’ except instead of collecting Messier targets I like to collect techniques and processes. The list includes things like de-rotation, photometry, submitting more Minor Planet Circular reports to get an official observatory designation, comet stacking, solar eclipse photography, nebula animation and more. I’m also halfway through an astronomy degree at Swinburne, so yes… lots to do!

You can see more of Dylan’s work on Instagram at instagram.com/dylan_odonnell_