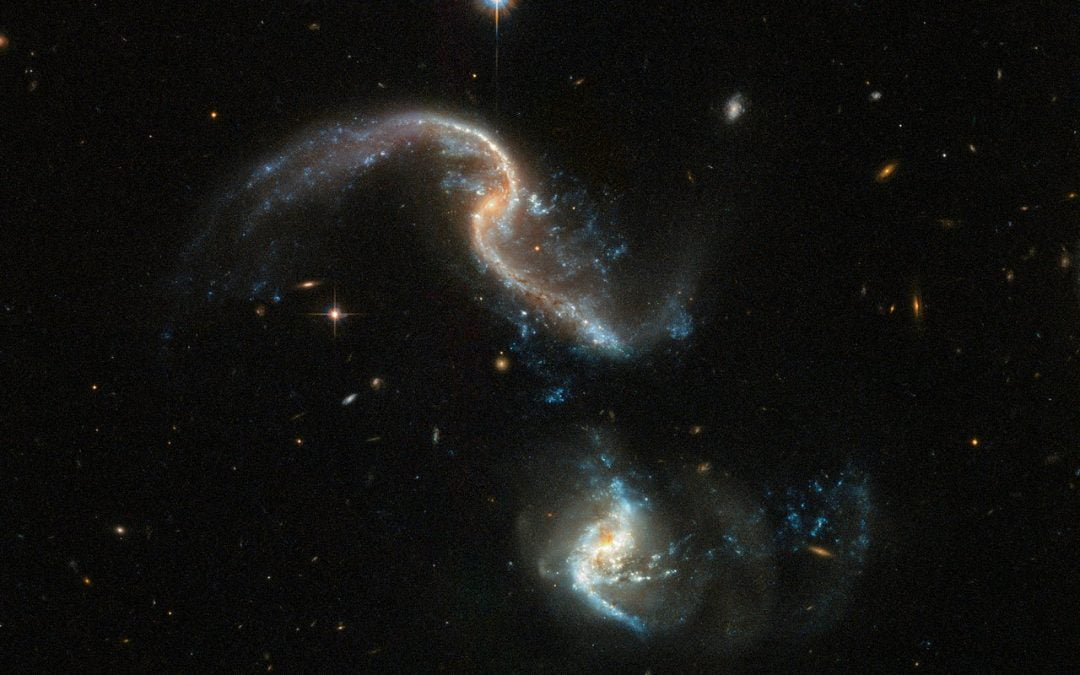 Above: The Hubble Space Telescope’s view of Arp 256, where two galaxies collided long ago.

Galaxies are not static islands of stars — they are dynamic and ever-changing, constantly on the move through the darkness of the Universe.

Sometimes, as seen in this spectacular Hubble image of Arp 256, galaxies can collide in a crash of cosmic proportions.

350 million light-years away in the constellation of Cetus (the Sea Monster), a pair of barred spiral galaxies have just begun a magnificent merger.

This image suspends them in a single moment, freezing the chaotic spray of gas, dust and stars kicked up by the gravitational forces pulling the two galaxies together.

Though their cores are still separated by a large distance, the shapes of the galaxies in Arp 256 are impressively distorted. The galaxy in the upper part of the image contains very pronounced tidal tails — long, extended ribbons of gas, dust and stars.

The galaxies are ablaze with dazzling regions of star formation: the bright blue fireworks are stellar nurseries, churning out hot infant stars.

These vigorous bursts of new life are triggered by the massive gravitational interactions, which stir up interstellar gas and dust out of which stars are born.

Arp 256 was first catalogued by Halton Arp in 1966, as one of 338 galaxies presented in the aptly-named Atlas of Peculiar Galaxies.

The goal of the catalogue was to image examples of the weird and wonderful structures found among nearby galaxies, to provide snapshots of different stages of galactic evolution.

These peculiar galaxies are like a natural experiment played out on a cosmic scale and by cataloguing them, astronomers can better understand the physical processes that warp spiral and elliptical galaxies into new shapes.

Many galaxies in this catalogue are dwarf galaxies with indistinct structures, or active galaxies generating powerful jets — but a large number of the galaxies are interacting, such as Messier 51, the Antennae Galaxies, and Arp 256.

Such interactions often form streamer-like tidal tails as seen in Arp 256, as well as bridges of gas, dust and stars between the galaxies.

Long ago, when our expanding Universe was much smaller, interactions and mergers were more common; in fact, they are thought to drive galactic evolution to this day.

The galaxies in the Arp 256 system will continue their gravitational dance over the next millions of years, at first flirtatious, and then intimate, before finally morphing into a single galaxy.

This spectacular image was taken by Hubble’s Advanced Camera for Surveys (ACS) and the Wide Field Camera 3 (WFC3). It is a new version of an image already released in 2008 that was part a large collection of 59 images of merging galaxies taken for Hubble’s 18th anniversary.