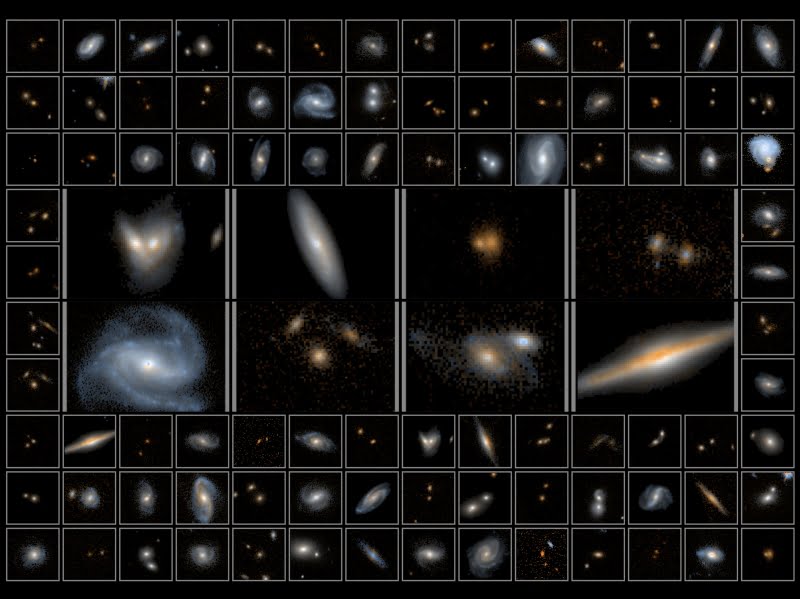 ABOVE: The near-infrared 3D-DASH project has revealed a variety of galaxies seen as they were at a range of epochs across the last 10 billion years. Image courtesy Lamiya Mowla.

Produced as part of the 3D-Drift And SHift (3D-DASH) project, the image — or more correctly, a mosaic of multiple images — covers an area almost six times the size of the Moon as seen from Earth.

The Drift and Shift method of imaging means the telescope takes a series of images, one after the other, which are afterwards calibrated and ‘stitched’ together.

It meant Hubble could take eight image per orbit rather than just one, and cover the entire area of interest in just 250 hours instead of 2,000.

And the area covered corresponds with a region of sky previously surveyed by Hubble under a project known as the Cosmic Evolution Survey.

Astronomers can now piece together information from both surveys.

“I am curious about giant galaxies, which are the most massive ones in the Universe formed by the mergers of other galaxies. How did their structures grow, and what drove the changes in their form?” said Lamiya Mowla, Dunlap Fellow at the Faculty of Arts & Science’s Dunlap Institute for Astronomy & Astrophysics at the University of Toronto and lead author of the study.

“It was difficult to study these extremely rare events using existing images, which is what motivated the design of this large survey.”

Data from 3D-DASH will be used to provide targets for the recently launched James Webb Space Telescope (JWST), which is optimised to ‘see’ at near-infrared wavelengths and which will be able to detect galaxies far back in time.

“3D-DASH adds a new layer of unique observations in the COSMOS field and is also a steppingstone to the space surveys of the next decade,” said Ivelina Momcheva, head of data science at the Max Planck Institute for Astronomy and principal investigator of the study.

“It gives us a sneak peek of future scientific discoveries and allows us to develop new techniques to analyse these large datasets.”

“Since its launch more than 30 years ago, the Hubble Space Telescope has led a renaissance in the study of how galaxies have changed in the last 10-billion years of the Universe,” added Mowla.

“The 3D-DASH program extends Hubble’s legacy in wide-area imaging so we can begin to unravel the mysteries of the galaxies beyond our own.”

You can view an interactive version of the 3D-DASH mosaic online, with which you can zoom in and out on the galaxies.