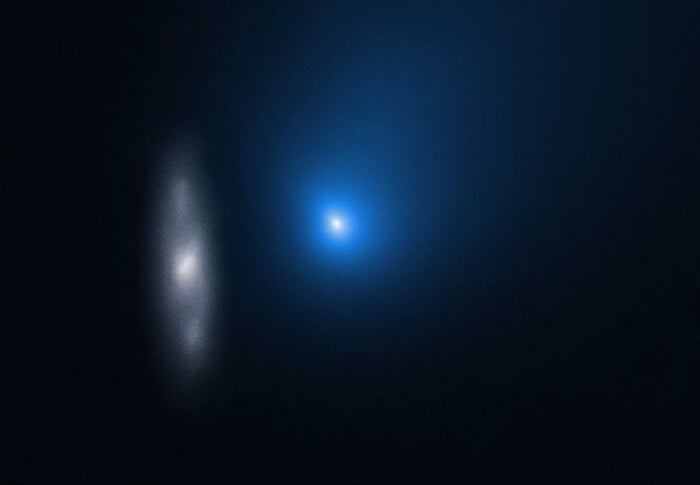 Above: Comet 2I/Borisov with its ejected dust cloud and trail is seen in the centre of this picture, taken with the Hubble Space Telescope. The white object at left is a far-distant background galaxy, the appearance of which is slightly smeared because the telescope was tracking on the comet. Image credit: NASA, ESA, and D. Jewitt (UCLA)

The Hubble Space Telescope has snapped an image of comet 2I/Borisov as it heads out of the Solar System at a speed of 175,000 km per hour.

Discovered on August 30, 2019 by Crimean amateur astronomer Gennady Borisov, it is only the second confirmed interstellar body ever discovered within the Solar System.

All other comets so far discovered originated from either the Kuiper Belt — a zone of icy bodies on the outskirts of the Solar System — or the even more distant Oort Cloud, the inner edge of which is 2,000 times further from the Sun than the Earth is.

The Hubble image is made from observations taken in November and December when the comet was 326 million kilometres from Earth.

“Hubble gives us the best measure of the size of comet Borisov’s nucleus, which is the really important part of the comet,” said David Jewitt, a professor of planetary science and astronomy at the University of California Los Angeles, whose team has captured the best and sharpest images of this first interstellar comet.

“Surprisingly, our Hubble images show that its nucleus is more than 15 times smaller than earlier investigations suggested it might be. The radius is smaller than half a kilometre,” said Jewitt.

“This is important because knowing the size helps us to determine the total number, and mass, of such objects in the Solar System, and in the Milky Way, ” he added.

2I/Borisov will pass Earth at a distance of 290 million kilometres in late December on its outward journey.

“Borisov is the first known interstellar comet, and we would like to know how many others there are,” said Jewitt.