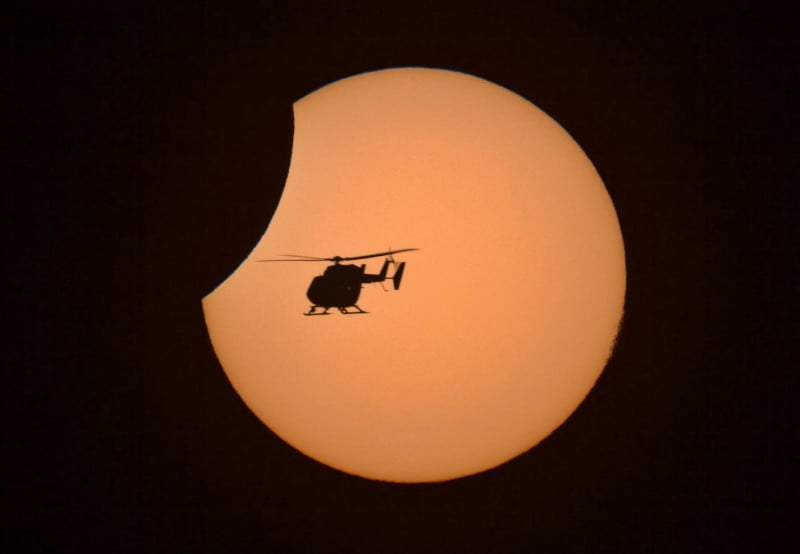 ABOVE: A helicopter faces off with the Sun and the Moon during December 4’s solar eclipse.

TASMANIAN ASTROPHOTOGRAPHER Peter Sayers was in just the right place at just the right time to snap this amazing shot of a helicopter photobombing the partially eclipsed Sun on December 4.

Peter was observing and photographing the last solar eclipse of 2021 — visible as a partial eclipse from Tasmania — when the helicopter stole the scene.

He used a Canon EOS 60Da camera and Sky-Watcher 100mm refractor equipped with a professional solar filter. The exposure was 1/200th of a second at f/9.

The path of totality in 2023 will just touch the western edge of the continent, with viewing possible from North West Cape and Barrow Island in Western Australia. Other locations will witness a partial eclipse.

For 2022, there will be four eclipses — two partial solars and two total lunars — but unfortunately we’re only going to be able to see one of the latter from our part of the world.

The year’s first eclipse will be a partial solar on May 1 (Australian time), visible from southern South America, the south-eastern Pacific and some of Antarctica.

Next will be total lunar eclipse on May 16, visible from the Americas, Africa, the Middle East and western Europe.

And on October 25 there’ll be another partial solar eclipse, visible across Europe, northern Africa, the Middle East and parts of Asia.

That just leaves the final total lunar eclipse, which will occur on the evening of November 8. This one will be visible across Australia, although not every state will have the best view — for those in Western Australia the Moon will already be coming out of the umbral phase as evening twilight is ending.