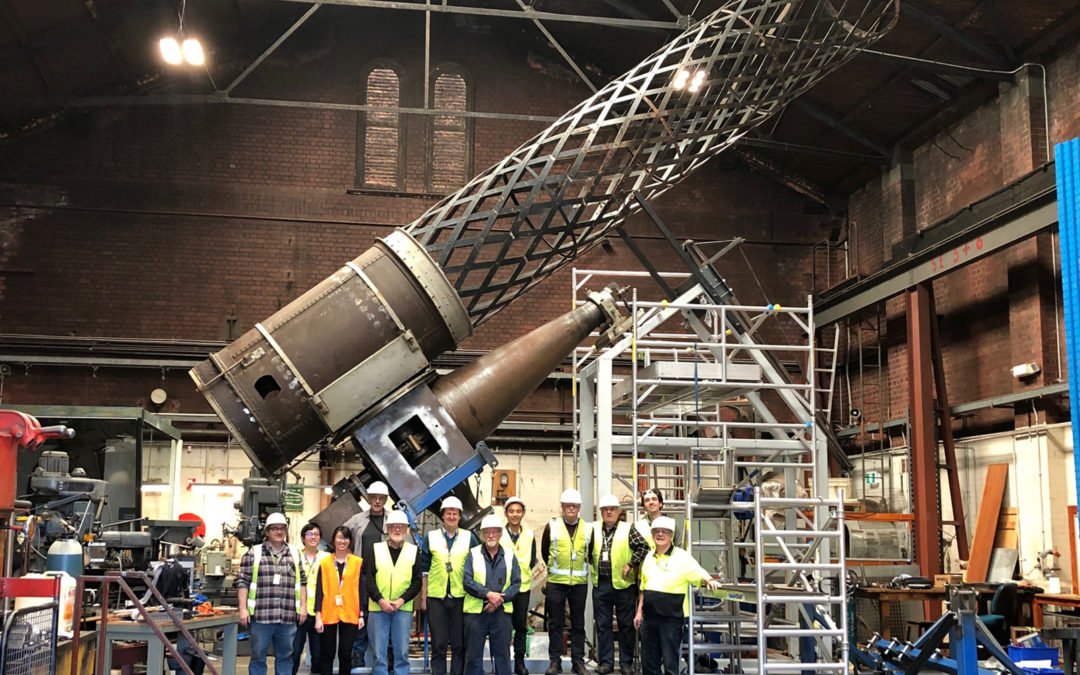 Above: Museums Victoria staff and volunteers with the Great Melbourne Telescope in the Pumping Station at Scienceworks in Spotswood.

Every Wednesday since 2008, volunteers have gathered to painstakingly restore one of 19th-century Melbourne’s most remarkable scientific instruments — the Great Melbourne Telescope.

Now after completing almost 1,000 engineering drawings and over 500 workshop sessions, this impressive 10-metre-high telescope has been reassembled for the first time in 74 years, to celebrate its 150th anniversary since being installed at the Melbourne Observatory adjacent to the Royal Botanic Gardens in 1869.

Affectionately known as ‘The Barrys’ (as four members of the group have either the first name or surname ‘Barry’ ), the volunteers are engineering and astronomy experts who have collectively contributed over 30,000 volunteer hours in their endeavour to get this very special telescope back into working order.

Barry Adcock, a retired engineer, is delighted that the first phase of the telescope’s restoration is now complete.

“It is a rare privilege to get to work on a historic telescope of this size. I am inspired by the innovative design of the Great Melbourne Telescope, which was a very advanced piece of engineering for its day,” he said.

The Victorian State Government recently committed $600,000 to help complete the first stage of the restoration, which has seen the telescope returned to its original physical configuration for Scienceworks visitors to admire in all its astronomical glory.

Minister for Creative Industries Martin Foley, said the funding recognises both the historical significance of the telescope and the important work of the restoration team.

“The Barrys are a shining example of the passionate volunteers in our creative industries — this grant recognises their dedication and efforts to help bring an important part of our history back to life,” he said.

When first used in 1869, the Great Melbourne Telescope was the second-largest telescope in the world and the largest in the Southern Hemisphere. It became an icon of ‘Marvellous Melbourne,’ symbolising the city’s wealth and scientific status.

After Melbourne Observatory closed in 1944, the telescope was sold and relocated to Mount Stromlo Observatory near Canberra. There it was modified for modern astronomy, and in the early 1990s was converted into Australia’s first fully robotic and computerised digital imaging telescope for an international project that found the first observational evidence of dark matter.

In 2008, the remains of the telescope were recovered by staff and volunteers from Museums Victoria and brought back to Melbourne for restoration.

A joint project by Museums Victoria, the Astronomical Society of Victoria, and the Royal Botanic Gardens Victoria was established to refurbish the telescope and reinstate it in the original Telescope House at the Melbourne Observatory.

You can read a detailed description of the restoration, here.

Led by curatorial and conservation staff at Museums Victoria, the project commenced by cataloguing and cleaning all surviving telescope components (in fact, one Barry claims that they broke the world record for the amount of WD40 required to clean and prise everything apart!) and manufacturing almost 400 missing components to reassemble the telescope in its original form.

Engineering curator, Matilda Vaughan said that “Our aim is to restore the telescope to operating condition so that the next generation of astronomy enthusiasts can peer through its giant eyepieces and be awe-inspired by magnificent views of celestial objects in our southern skies!\”

“We had only 65% of the original parts, a few historical photos and some technical drawings as a starting point,” added senior engineering curator, Matthew Churchward.

“We want to make sure we are retaining the historical integrity of the telescope by returning it to its 1860s specifications, using similar materials and manufacturing techniques to the original.”

Watch a video of the retrieval of the telescope from Mount Stromlo Observatory and the early stages of the restoration.

Every aspect of this project has been a team effort. Funding from Creative Victoria, the Copland Foundation, the Myer Foundation and the Ian Potter Foundation have complemented each other to make the restoration of this fantastic historical object possible.

The team is now seeking an additional $1.5 million to support the second phase of the restoration that will see the telescope taken from a static display piece to a fully functioning telescope, fit for public use.

The goal is to return of the telescope to the Melbourne Observatory to become the centrepiece of a world-class public astronomy program.

Members of the public who are interested in supporting this project are encouraged to get in touch with Museums Victoria’s development team on 8341 7303. Anyone who would like to see the restoration work in action can view the Great Melbourne Telescope in the historic Pumping House at Scienceworks. It can be viewed daily, with the volunteer team working on Tuesdays and Thursdays.