Galaxies that go bump in the night 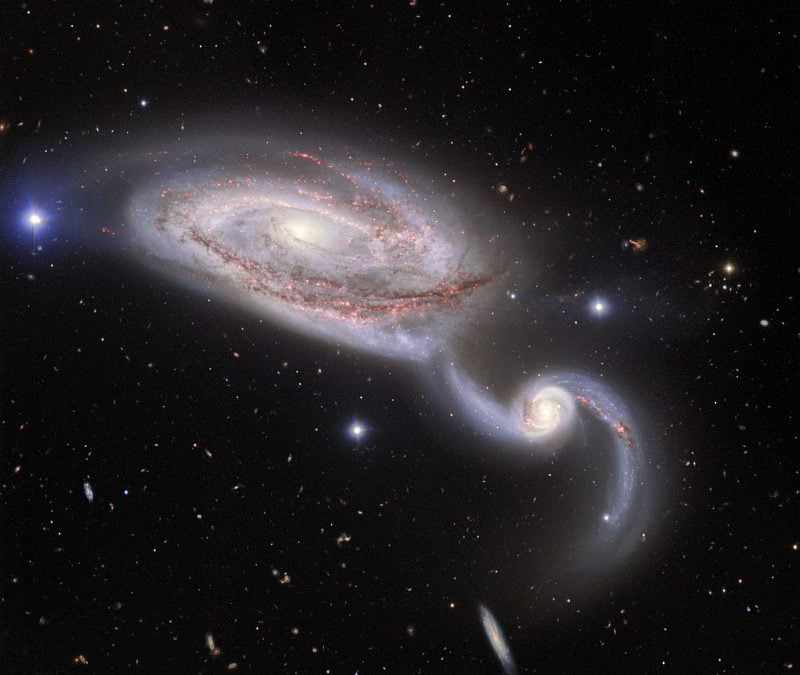 This image from the Gemini Observatory shows two galaxies in the process of a long, slow interaction. Caught in each other’s gravity, they’re slowly coalescing.

NGC 5394 (the smaller of the two) and NGC 5395, also known collectively as Arp 84 (and colloquially as the Heron Galaxy) are 160 million light-years from Earth.

It might seem that when galaxies collide, individual stars would smash into each other. But they don’t — the distances between stars are so vast that two galaxies can pass right through each other.

That appears to be what has happened with these two, which is why astronomers often refer to ‘interacting galaxies’ rather than ‘colliding galaxies’.

But even though stars don’t collide, interaction does have its consequences.

One of them, caused by gravitational effects, is turbulence within gas clouds, which leads to compression and heating of the gas and eventually the formation of new stars.

The reddish regions seen in the image are just such star-formation regions.

Another of the effects of interaction is to pull long streamers of gas out of the galaxies, also seen in image.

NGC 5394/5395 was first spotted by astronomer William Herschel in 1787 using his famous 6.5-metre-long telescope, the same year in which he discovered two of Uranus’ moons.