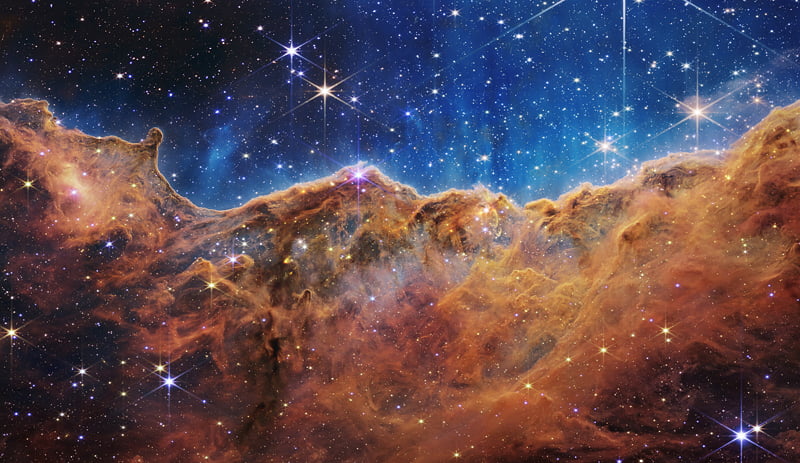 ABOVE: The James Webb Space Telescope’s view of the ‘cosmic cliffs’ in the Carina Nebula.

THE FIRST TRANCHE OF IMAGES AND DATA from the James Webb Space Telescope has wowed the astronomical world with their clarity and fidelity.

The four images and one light spectrum, unveiled at a ceremony at the White House in Washington DC on July 13 (Australian time), demonstrate the power of this new space observatory and are a tantalising hint of things to come.

Let’s go through them one by one.

First up is Webb’s ‘deep field,’ a single image that contains thousands of galaxies near and far. In the centre is a cluster of white-looking galaxies known as the SMACS 0237 cluster. Located 4.6 billion light-years away, its combined gravity is acting like a lens and bending and distorting the light of even-more-distant galaxies in the far background… some of which show up as weird arcs and blobs due to that lensing effect. One of those distant galaxies has had its redshift determined, showing that it is 13.1 billion light-years away.

Next is a planetary nebula known as the Southern Ring Nebula, with catalogue number NGC 3132. Situated 2,000 light-years from Earth, it has been formed by a star in its centre blowing off waves of gas over many years. Webb has given us two views — the one on the left taken at near-infrared wavelengths, and the one on the right at mid-infrared wavelengths. See the bright star in the middle of the nebula in the left-hand image? You’d be forgiven for thinking that this is the star that has been ejecting layers of gas. But no, it’s not. Take a look at the image on the right. See how there are two stars in the middle? It is the fainter one is that is the culprit. The brighter star is much younger and is not yet ready to expel any gas layers.

The third image shows Stephan’s Quintet, a famous grouping of five galaxies. Four of them are very close to each other, about 290 million light-years from Earth. The fifth galaxy, on the left, is actually much closer — about 40 million light-years — but certainly looks as if it is a companion of the other four.

Then there’s Webb’s image of a small part of the Carina Nebula (pictured at the top of the page). The entire nebula is quite huge — the tiny portion shown here is known as the ‘cosmic cliffs’. The tallest of the ‘peaks’ along the cliff are seven light-years high.

Finally, Webb has produced detailed data (but no images) of the atmosphere of an exoplanet called WASP-96b, which orbits a Sun-like star about 1,150 light-years away. The light spectrum shows the unmistakable presence of water vapour and hints of atmospheric haze. The presence of water on an exoplanet is considered to be a good sign of potential habitability, although maybe not in this case — WASP-96b’s atmospheric temperature is thought to be about 725°C.

One thing to note is that — with the exception of many of the background galaxies in the deep field image — none of the objects showcased in Webb’s first science release are ‘new’. They’ve all been seen and imaged and studied many times before.

But that’s precisely why they were chosen — to enable us to compare those earlier images and analyses with the ones that Webb can produce. And that’s because, for many scientific purposes, Webb is far more powerful and efficient than anything that has come before it.