Father, son and the changing universe 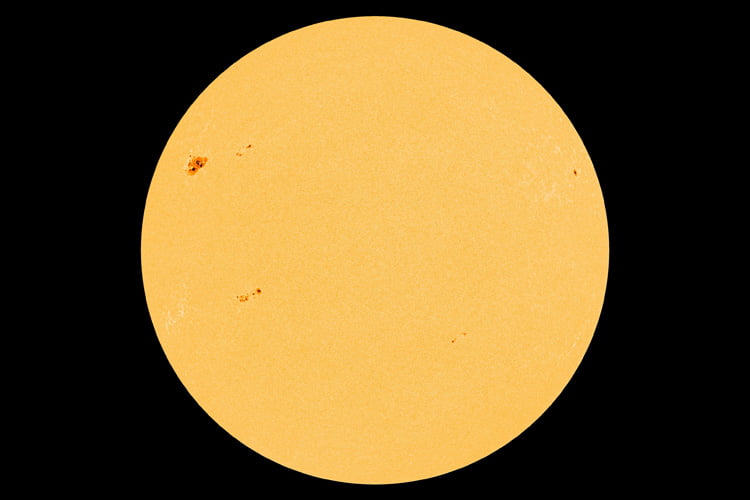 ABOVE: By tracking sunspots, David and Johannes Fabricius showed that the Sun rotates — another nail in the coffin for an unchanging universe. Credit: NASA/SDO/HMI.

WHEN WE THINK OF THE PEOPLE who started modern astronomy, 400 or 500 years ago — liberating it from the erroneous concepts that had held it back for a thousand years or more — some names come quickly to mind. The great Galileo of course, plus Copernicus, Kepler and Tycho.

But the revolution in the way we saw the universe was the work of more than just a few greats. There are many others whom we should recall — less famous, less influential, but who still made significant contributions. Some of these less-celebrated sky watchers made discoveries that preceded even those of their better-known contemporaries.

David Fabricius was one of them. A little older than Galileo, he was a Lutheran pastor, who, like many of his colleagues in the years following the Reformation, had an interest in science… particularly astronomy. These men saw the methodical study of the universe as a way of honouring the god whom they believed created it. Fabricius served in various churches in regions now located in northwest Germany and northeast Holland, during which time he found time to correspond with Kepler.

Fabricius is remembered for two significant discoveries — one before and one after the invention of the astronomical telescope around 1610. Each in its way challenged the long-held orthodox view of how the universe is arranged, with an unmoving Earth at the centre and everything beyond the orbit of the Moon eternal and unchanging.

In 1596, Fabricius was observing Mercury and wanted a star as a reference for the planet’s brightness. He chose one in the nearby constellation of Cetus. A few weeks later he noted that the chosen star had brightened noticeably, and then faded from view. Fabricius thought he had seen a ‘nova’ or ‘new star,’ of a type seen before. Novae flare up and then die away, never to be seen again. But in 1609, he saw that the star had reappeared, so it represented a new type of star, a ‘periodic variable’. It also provided another piece of evidence that all not was unchanging beyond the Moon. Sometime later, the star became known as Mira, meaning the ‘wonderful one’.

Shortly after, Fabricius and other astronomers gained a powerful new tool to aid their work, with the invention of the telescope. Late in 1610, Fabricius and his son Johannes, newly home from university, were using the new device to observe the rising Sun. They saw that the face of the Sun was marked with spots. To avoid the pain and possible eye damage from looking directly at the Sun, they soon switched to projecting the image from the telescope onto a wall so it could be viewed safely.

Over the following weeks, they saw that the spots moved day by day, appearing on one edge of the Sun and disappearing behind the other. This indicated that the Sun turned on its axis, about once a month, a notion that had been suggested before but never proved. So something else in the cosmos was not unchanging.

Fabricius, both father and son, may not have been the only ones to see sunspots at the time, but they were first to publish their discovery. In June 1611 (about the time Galileo produced his epoch-making Starry Messenger) Johannes published Maculis in Sole Observatis, et Apparente earum cum Sole Conversione Narratio (‘Narration on Spots Observed on the Sun and their Apparent Rotation with the Sun’). Unfortunately he died soon after at the young age of 29, and as a result the book did not get much traction — it was soon eclipsed by other observations and accounts, including those of Galileo and Christoph Scheiner, the astronomer at the Vatican. But Fabricius senior and junior still got there first.

The Fabricius duo was among the many foot soldiers in the long march of astronomy from ignorant beginnings to the immense wealth of understanding we have today, with school children now aware of things unknown even to the great general Galileo. And so the march continues.