Dawn of the asteroids 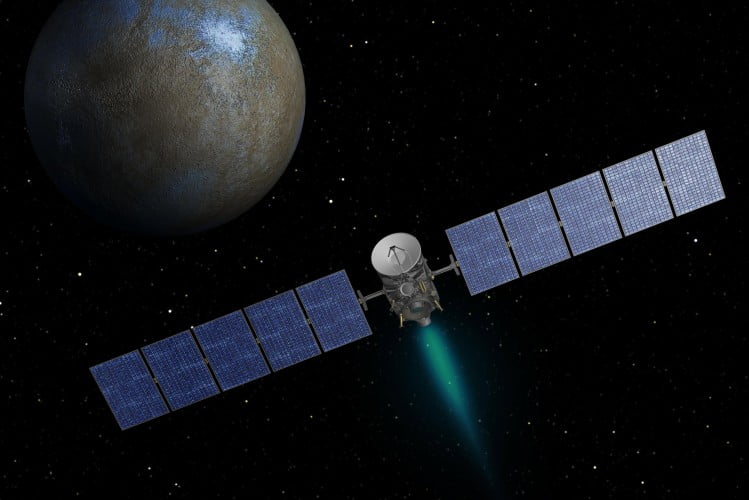 ABOVE: The Dawn spacecraft’s ion engine allowed for slow but steady acceleration in order to reach the asteroid belt. Image credit: NASA/JPL.

WE’VE KNOWN OF THE EXISTENCE of ‘minor planets’ or asteroids in the Solar System since the start of the 19th century, when Ceres, Vesta and some others of the largest were first detected. Since then the number known, large and small, has grown to many hundreds of thousands, most of them orbiting the Sun in the asteroid belt between Mars and Jupiter (see page 20).

For most of that time, these celestial bodies were merely points of light through our largest telescopes, just as the other planets had before the invention of the telescope 400 years ago. Analysing the light reflected from asteroids using spectroscopes provided insights as to their composition, but they are so small and so far away that for a long time we were unable to image their surfaces.

The arrival of the Hubble Space Telescope and big ground-based telescopes has helped but, as with the major planets, the best way to increase our knowledge has been to send cameras and other instruments right up close — to fly by, to orbit or even to land on the objects of interest. And so by now every planet, and many of their moons, have been seen in detail.

And so it has been with some of the minor planets, too, particularly Ceres and Vesta. (To be precise, Ceres is now classified as a ‘dwarf planet,’ along with Pluto and some others on the fringes of the Solar System). One such mission was conducted by the spacecraft called Dawn, launched in 2007. It reached Vesta in 2011 and orbited for a while, before moving on to Ceres in 2015. Dawn thus became the first spacecraft to orbit two extra-terrestrial bodies, as well as the first to visit a dwarf planet.

Why did it take so long to reach its targets? The answer lies in its propulsion system. Dawn was equipped with an ‘ion drive’. It was pushed along not by hot gases from chemical reactions — your typical rocket fuel — but by emitting charged atoms (‘ions’) of the rare gas xenon that were accelerated by electric fields, powered by electricity from solar cells.

The thrust of its engines was very gentle. Once launched into space, at full ion throttle Dawn had to accelerate for four days just to add its first 100 kph. But the beauty of the ion engines is that the push could go on uninterrupted for weeks or months, thus building up very high speeds. Throughout the mission, Dawn’s engine was thrusting for nearly 60% of the time.

Because it could pick up speed only so slowly, Dawn could not head straight for its targets. Rather it had to move slowly outwards in a spiral. Along the way it flew close to Mars, using that planet’s gravity to kick it along.

Once it reached its targets, Dawn went into a series of decreasing orbits, moving ever closer until it was 100 kilometres or less above the surface. This allowed for highly precise imaging and mapping of the crater-strewn landscapes beneath, while other instruments collected gamma rays and neutrons to determine what the surface rocks were made of.

Clearly the mission was a technical triumph, with its handlers overcoming a raft of challenges along the way. But what did it teach us? As with all such missions, the data will be worked over for years, but some things were clear quite soon. The high-resolution images of Vesta revealed two immense craters, up to 500 km across, near its south pole, evidence of a violent past. (Vesta is less than 1000 km wide). One of these had a central peak 20 km high (more than twice the height of Everest), arguably the highest mountain in the Solar System. Vesta appears to be perhaps the last of the ‘planetesimals’ that came together billions of years ago to form the major planets, including Earth.

Ceres was different in many ways, suggesting a different history, perhaps volcanic. Bright deposits of salts such as sodium carbonate could be seen in some of its craters. Evidence suggests Ceres holds a lot of water ice, making up 25% of its mass.

Dawn’s active life ended in 2018, when it exhausted its supplies of the thruster fuel used to control its orientation in space. That meant no more useful scientific work could be done. Now silent, it remains in lonely orbit around Ceres.

DAVID ELLYARD is the author of Who Discovered What When.