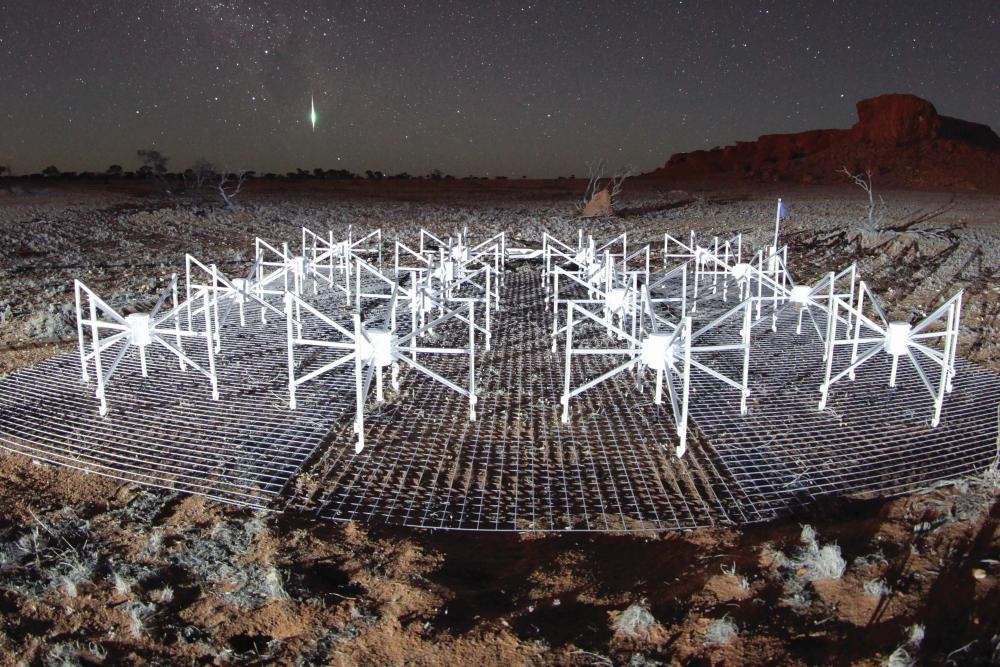 Above: Just a handful of the more-than 4,000 antennas of the Murchison Widefield Array radio telescope in Western Australia. Credit: John Goldsmith

A NEW $2 MILLION COMPUTING FACILITY based at the Pawsey Supercomputing Centre in Perth will crunch the huge amounts of data produced by the Murchison Widefield Array (MWA) radio telescope.

The MWA comprises a large group of radio antennas spread across parts of the Western Australia desert, and is a stepping-stone or ‘precursor’ of the future much-larger Square Kilometre Array.

Both the MWA and the Australian SKA Pathfinder (ASKAP) are located at the Murchison Radio-astronomy Observatory in WA, which is owned and operated by the CSIRO.

The number of antennas in the MWA has recently been doubled, and ASKAP will soon begin undertaking full surveys of the sky.

Modern observatories such as these, produce copious quantities of data that needs to be crunched at high speed.

The new computer — a cluster of 78 ‘nodes’ that comprise the latest in computing technology — will do just that.

Until now, MWA and ASKAP researchers have used the Pawsey Supercomputing Centre’s Galaxy special purpose supercomputer, which itself is to be upgraded at a cost of $70 million, funded by the federal government.

“Procurement of the new MWA cluster was the result of a thorough consultation process with key stakeholders and will provide the best system possible to respond to the specific needs of MWA telescope users,” he added.

Professor Melanie Johnston-Hollitt, MWA Director, said that the procurement process is an “outstanding example of collaboration between Pawsey and MWA”.

“As a researcher, I am excited that this new infrastructure will give us the chance to accelerate our workflows, leading to faster scientific discoveries and for providing the opportunity to continue to use the MWA as a scientific, technical, and operational testbed for the future Square Kilometre Array,” she added.

For the technically minded, the new 546-TeraFlop MWA cluster will have 78 nodes, each with two Intel Xeon Gold 6230 processors operating at 2.1 GHz providing a total of forty compute cores, plus a single NVIDIA V100 with 32 GB of high-bandwidth memory, 960 GB of local NVMe storage and 384 GB of main memory.

High-performance computing supplier HPE has been awarded the contract. The firm not only met the technical requirements, but also brings an ability to apply local and global resources to provide the best level of support for the lifetime of the system.

Commissioning of the MWA computing cluster is expected to be completed by the second quarter of 2020.