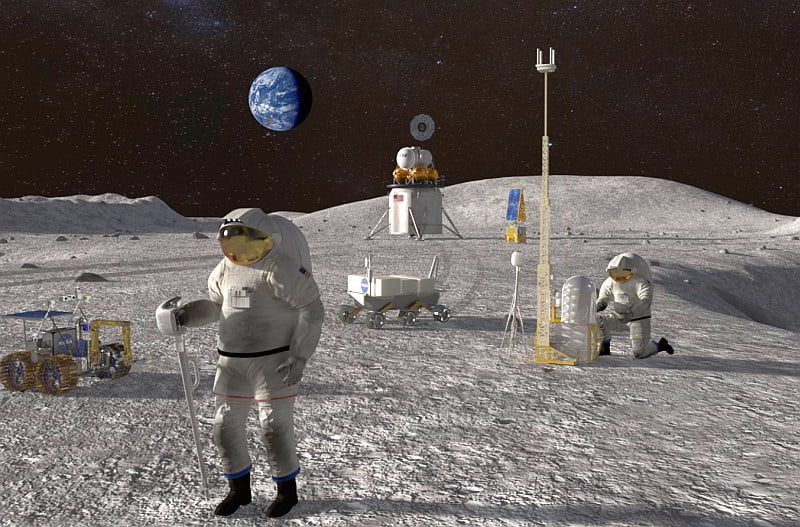 Above: An artist’s impression of a future lunar base. Courtesy NASA.

The five-year investment through the Australian Space Agency aims to foster new ideas and produce high-technology jobs that will position Australian businesses as attractive partners for NASA missions.

The announcement was made at a ceremony Saturday at NASA Headquarters in Washington during which NASA Deputy Administrator, Jim Morhard, and Head of the Australian Space Agency, Megan Clark, signed a joint statement of intent.

“We are honoured by today’s statement and the commitment of our friends from Australia to support us in our mission to return to the Moon by 2024 with the Artemis program,” Morhard said.

“The strong relationship between NASA and the Australian Space Agency affirms NASA’s commitment to establish sustainable exploration with our commercial and international partners by 2028.”

The US administration has tasked NASA with returning humans to the surface of the Moon by 2024, followed later by the first crewed mission to Mars.

“We’re backing Australian businesses to the Moon, and even Mars, and back,” said Prime Minister Scott Morrison during his current visit to the US.

“We’re getting behind Australian businesses so they can take advantage of the pipeline of work NASA has committed to.

“There is enormous opportunity for Australia’s space sector which is why we want to triple its size to $12 billion to create around 20,000 extra jobs by 2030.

“We’ve partnered with the US in almost all of their missions to space for the last 60 years and this investment paves the way for the next 60. The growing amount of space sector work and innovation will also inspire the next generation to see the future of a career in these fields for the long term.”

Australia’s Minister for Industry, Science and Technology, Karen Andrews, said that the funding announcement is a “milestone moment” for the Australian space industry, but would also benefit the wider community.

“This agreement is all about opportunity, for us to take the Australian space sector to the next level, grow our economy and create new local jobs,” Minister Andrews said.

“Space also drives technology which has a profound and everyday impact on the lives of Australians – from disaster management, to helping farmers better manage their land and predict drought, through to improving GPS.

The Space Industry Association of Australia (SIAA) has welcomed the announcement.

“This is a tremendous step forward for Australia’s growing space industry, and will provide a significant injection of funding, which will underpin both jobs and growth in our space sector,” said Rod Drury, chair of the SIAA.

“The Australian space industry has been growing steadily, as reflected in the exponential growth in our membership. Strong leadership and support from the Federal Government has accelerated this growth in the domestic space industry,” he added.

“A partnership with NASA will provide the next big incremental step needed to ensure continued expansion in the industry, encouraging the development of local skills and expertise and enabling a host of job opportunities for both current and future participants in the space sector, as well as motivating and encouraging our budding space enthusiasts.”