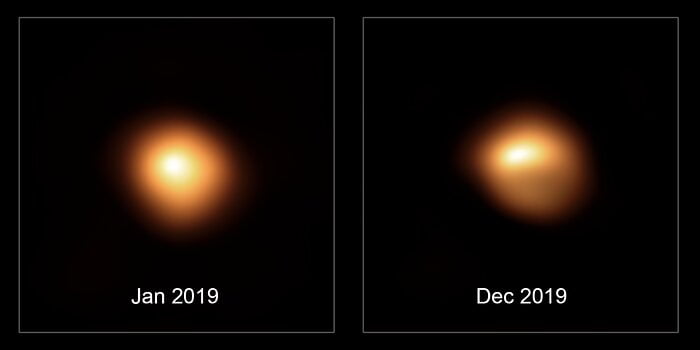 Above: Before and after images of the star Betelgeuse. Astronomers suspect the changes are due to changes in convection activity on the Betelgeuse’s surface or obscuration by clouds of dust surrounding the star. ESO/M. Montargès et al.

OBSERVATIONS MADE WITH THE European Southern Observatory’s (ESO) Very Large Telescope (VLT), have shown how the star Betelgeuse has changed in recent times.

Astronomers have been closely monitoring the star ever since it began a substantial decline in brightness late last year.

Betelgeuse is a red supergiant star and a candidate to one day explode as a supernova… which some astronomers have estimated will occur sometime in the next 100,000 years.

The unexpected decline in the star’s light output has led some to speculate that the supernova explosion could happen sooner than first thought, although most researchers think it unlikely that it would happen within our lifetimes.

The new images captured by the VLT reveal detail of the star’s surface and show not only that the star is fading, but also that its apparent shape is fluctuating.

A research team led by Miguel Montargès (KU Leuven, Belgium), has been monitoring the star using the VLT since December.

Using an instrument called SPHERE, they’ve produced an image of Betelgeuse’s surface, and compared it with another SPHERE image made in January 2019, before the star began to fade.

The before-and-after images demonstrate the changes in both the star’s brightness and apparent shape.

So do the changes indicate a supernova explosion is about to take place? Montargès doesn’t think so.

“The two scenarios we are working on are a cooling of the surface due to exceptional stellar activity or dust ejection towards us,” said Montargès.

Stellar activity refers to huge convection cells of hot plasma that rise, fall and churn in the star’s interior, and which can be detected on its surface.

“Of course, our knowledge of red supergiants remains incomplete, and this is still a work in progress, so a surprise can still happen,” he added.

Another VLT image — made with the VISIR instrument in December 2019 by a team led by Pierre Kervella (Observatory of Paris) — shows infrared light detected from the dust surrounding Betelgeuse.

The dust is produced when the star sheds material into space.

“The phrase ‘we are all made of stardust’ is one we hear a lot in popular astronomy, but where exactly does this dust come from?” says Emily Cannon, a PhD student at KU Leuven working with SPHERE images of red supergiants.

“Over their lifetimes, red supergiants like Betelgeuse create and eject vast amounts of material even before they explode as supernovae.”

“Modern technology has enabled us to study these objects, hundreds of light-years away, in unprecedented detail giving us the opportunity to unravel the mystery of what triggers their mass loss,” she added.