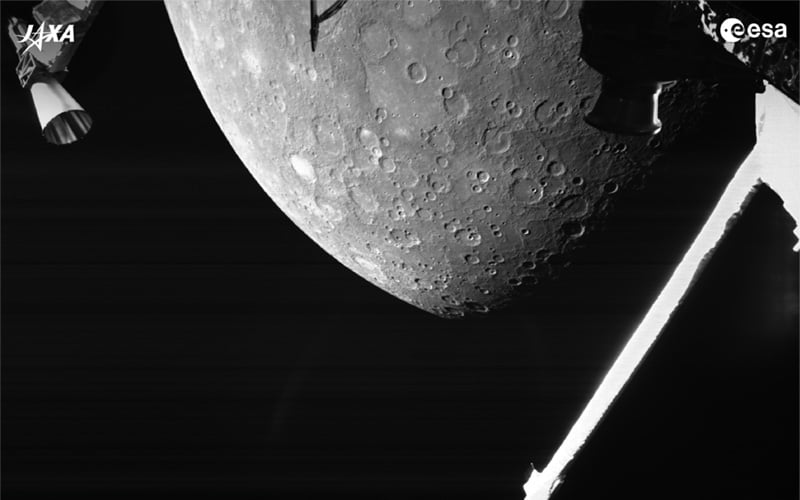 THE BEPICOLOMBO SPACECRAFT HAS SUCCESSFULLY conducted its first trajectory-changing flyby of Mercury, three years after launch and almost four years prior to reaching its final orbit around the innermost planet.

During the flyby on October 1 UTC (October 2, Australian time), the intrepid spacecraft zoomed over Mercury’s cratered surface at a closest altitude of just 199 kilometres.

A suite of images from the craft’s low-resolution monitoring cameras, as well as data collected by other scientific instruments, were beamed back to Earth.

“The flyby was flawless from the spacecraft point of view, and it’s incredible to finally see our target planet,” says Elsa Montagnon, Spacecraft Operations Manager for the mission.

As closest approach occurred over the night-time side of Mercury, no images were taken of the planet during that phase.

Instead, images were taken beginning from about five minutes after closest approach and up to four hours afterward. The closest image was taken from an altitude of about 1000 kilometres.

“It was an incredible feeling seeing these almost-live pictures of Mercury,” said Valetina Galluzzi, co-investigator of BepiColombo’s SIMBIO-SYS imaging system that will be used once in Mercury orbit.

“It really made me happy meeting the planet I have been studying since the very first years of my research career, and I am eager to work on new Mercury images in the future.”

“It was very exciting to see BepiColombo’s first images of Mercury, and to work out what we were seeing,” said David Rothery of the UK’s Open University who leads ESA’s Mercury Surface and Composition Working Group.

“It has made me even more enthusiastic to study the top quality science data that we should get when we are in orbit around Mercury, because this is a planet that we really do not yet fully understand.”

The images (which deliberately show parts of the spacecraft in the frames) show what we already know — that Mercury is a dry, barren world of craters and solidified lava plains.

“In addition to the images we obtained from the monitoring cameras we also operated several science instruments on the Mercury Planetary Orbiter and Mercury Magnetospheric Orbiter,” added Johannes Benkhoff, ESA’s BepiColombo project scientist.

“I’m really looking forward to seeing these results. It was a fantastic night shift with fabulous teamwork, and with many happy faces.”

Sending missions to the inner planets (Mercury and Venus) is tricky, because the direction is towards the Sun. The closer a spacecraft comes to the Sun, the stronger the solar gravity, and the greater the acceleration of the craft. A mission will pick up so much speed by the time it reaches, say, Mercury, that it would take a large rocket motor and a lot of fuel to slow down sufficiently to enter orbit around the planet. This is just not practicable.

Instead, mission planners devise a series of flybys that gradually change the spacecraft’s trajectory and velocity and enable it to sidle up to the planet.

That’s why, before settling into its final orbit around Mercury in December 2025, BepiColombo will have conducted nine planetary flybys, each one bringing the craft closer to its final trajectory: