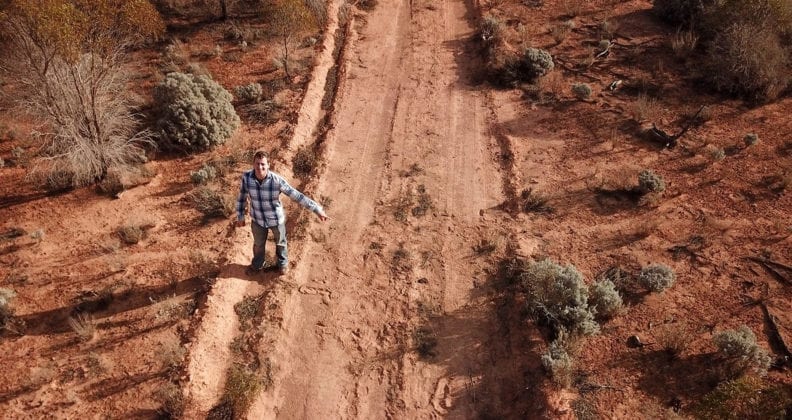 Above: Curtin University scientist Dr Hadrien Devillepoix pointg to the meteorite found lying in the middle of an old telegraph track near Madura in Western Australia. Image courtesy DFN.

Both meteorites were found lying on the ground in Australia’s desolate Nullarbor Plain desert region.

The DFN uses cameras to spot meteors as they flash through Earth’s upper atmosphere. From the images produced, the team can determine the likelihood that some of the meteoroid material has survived atmospheric entry to fall to the ground as meteorites.

The images can also be used to estimate the locations of the falls.

To clarify: ‘meteoroid’ is the name given to bits of dust and rock moving through space, and which sometimes collide with the Earth. ‘Meteor’ is the name given to the flash of light we see in the sky when a meteoroid enters the atmosphere. If any of the meteoroid survives and falls to the ground, it is called a ‘meteorite’.  A fireball is a particularly bright meteor.

“The DFN cameras continuously take pictures of the sky every night, and when more than one station detects a fireball, we receive an alert, and then we analyse that data so we can learn more about the fireball,” said Professor Phil Bland, the Director of the Space Science and Technology Centre (which oversees the DFN project).

Just as COVID-19 movement restrictions began to lift recently, a bright meteor was spotted by the DFN cameras. The estimated location of the fall was just south of the Eyre Highway near Madura in Western Australia.

Astronomer Dr Hadrien Devillepoix and planetary geologist Dr Anthony Lagain drove to the area to check out the site, and used a drone to make imagery of the landscape.

Purely by accident, as they were walking back to their car along an old telegraph track, they spotted what appeared to be a meteorite lying on the ground in front of them.

“I thought Anthony was playing a prank on me, that he planted one of the fake meteorites we were using for the drone training session,” he said.

“But after a closer inspection, it was evident that the fist-sized, 1.1-kilogram rock we just found was indeed the meteorite we were after.”

A Desert Fireball Network image of a fireball spotted on November 29, 2014. Scientists can combine images from several cameras and use the data to triangulate where meteorites might have landed. Image courtesy DFN.

Many meteorites contain a large proportion of metallic iron, which makes them fairly easy to identify using a magnet. But not this one.

Dr Devillepoix said that “the meteorite that we found almost entirely fails the compass test — the compass needle barely gets disturbed, which is really intriguing.”

“The next step for us is to now figure out why this is happening and what is making this meteorite so different to the others we know about.”

Tracking back along the orbit

The meteor trajectories determined from the fireball cameras not only enable the scientists to work out where potential meteorites may have fallen. They can also be used to backtrack the meteoroids’ trajectories through space, and so help determine what their solar orbits were before they collided with the Earth.

In the case of this meteorite, the scientists were able to determine that “this meteorite was on an Aten orbit, which means that before it fell to Earth, the meteorite spent most of its time in the innermost Solar System, between Venus and Earth,” said Dr Devillepoix.

“This type of orbit is unusual because, as most meteorites come from the asteroid belt between Mars and Jupiter, they usually retain an orbital connection to this area of space.”

Two weeks after Devillepoix and Lagain found their meteorite, a second meteorite was located by a team led by Dr Martin Towner, operations chief of the DFN team.

Dr Towner’s team of six people journeyed to search the estimated fall site — west of Forrest airport in the middle of the Nullarbor — to look for the remains of a fireball spotted by the cameras on November 18, 2019.

It took only four hours of searching for them to find the 300-gram meteorite that the DFN had seen come in on the night of November 18th, 2019.

Trajectory calculations show that this one came from a very different orbit, originating from the middle of the main asteroid belt.

Dr Eleanor Sansom, DFN project manager, said that even though these two recent successful finds — made so soon after being spotted by the cameras — make it seem as if finding meteorites is easy, it is in fact an unusual and amazing achievement.

“Teams around the world have been trying to recover meteorites with orbits since the 1950s, but so far only around 40 have been recovered overall, and although the DFN is relatively new in this game, it already accounts for a significant part of this success,” Dr Sansom said.