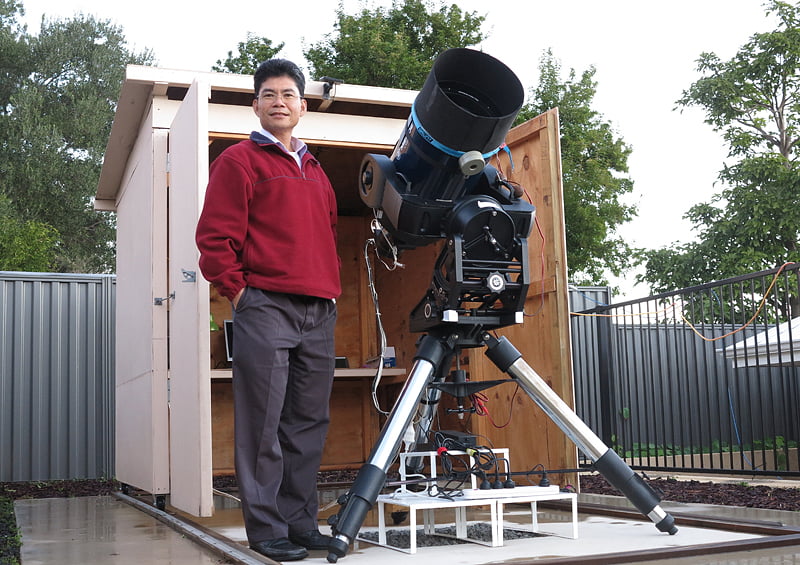 ABOVE: TG Tan and the PEST Observatory in his backyard, with which he hunts for transiting exoplanets.

EVERY TWO YEARS, AUSTRALIA’S PROFESSIONAL ASTRONOMERS bestow the Berenice and Arthur Page Medal on an amateur astronomer who has made significant scientific contributions in the field. The Medal is named in honour of a husband-and-wife amateur team who were active in astronomy from the 1960s onward, and who were members of the Astronomical Society of Australia (ASA). This year, the ASA has awarded the Medal to TG Tan.

Tell us about the Perth Exoplanet Survey Telescope Observatory

The PEST Observatory is an off-the-shelf telescope in a homemade plywood shelter located in my backyard. With it, I do high-precision observations for discovering new exoplanets. Exoplanet discovery is a team sport requiring many different skills and much bigger telescopes, so I work with teams of, mainly, professional astronomers. The main collaboration at the moment is with NASA’s Transiting Exoplanet Search Satellite (TESS) Follow-up Observing Program.

How and why did you get involved?

Back in 2010 I had just finished running a backyard supernovae search program. It was successful, uncovering three supernovae, but I was looking for a fresh challenge. I wondered if it were possible for a backyard telescope to detect transiting exoplanets. At the time, about 70 had been found, and the pace of discovery was picking up. I did some calculations and then confirmed that it could be done by observing a known exoplanet. To get higher precision, I upgraded my telescope and camera, and by the end of 2010 the PEST was running and producing nice light curves of known exoplanets.

Dr Josh Pepper (Lehigh University) had heard of my work from others and invited me to join the Kilodegree Extremely Little Telescope (KELT) exoplanet search team that he was setting up. This eventually led to other invitations, including from the TESS team.

How do you conduct your observations?

PEST is largely automated. I select a target, usually a candidate planet, from the team database. I script observations for the night, which the observatory computer then runs. Those runs are usually unattended, although occasionally something goes wrong which I have to fix. Recently a scary incident occurred when the scope slewed off to a crazy angle and suffered minor damage.

The next day I run the images acquired through a set of programs, most of which I wrote, to get light curves and other reports. These are shared with the team, usually by uploading to the online database.

What sort of equipment do you use?

PEST uses amateur-level equipment with shortcomings (eg. poor tracking) compensated for in software and by careful observing techniques. The telescope is a Meade LX200 30-cm SCT, and the camera is an SBIG ST-8XME. There is an Optec temperature-compensated focuser, which is absolutely essential for unattended runs.

The plywood roll-off shelter is very basic. It recently acquired a COLORBOND roof after the old plywood roof had started rotting, and is painted with discounted off-tints from Bunnings. PEST has worn some pretty funky colours in the past.

What got you into astronomy?

I watched the 1969 Moon landing on TV and pored over those wonderfully detailed photos they took. My family couldn’t afford a telescope so I thought about making one from spectacle lenses. Dad arranged for me to speak to the town optometrist, but he did not understand my calculations and said it couldn’t be done.

What was your first telescope set-up?

Years later, at the Perth Royal Show, I saw a telescope that I finally could afford. It was a 20-cm Newtonian, and with it I explored the planets, star clusters and bright nebulae. Visual observing from the suburbs is not very rewarding, so I started to experiment with astrophotography… first with a film camera and manual guiding (very hard), then progressing from converted webcam to modified DSLR to kit-built CCD camera.

I’m probably not the only amateur astronomer with aperture fever — the next step is a bigger telescope to get the higher precisions needed to detect Earth-size planets. PEST can now detect transits down to a precision of about 2 parts per thousand. To do better I’ll need to collect more photons. Instead of a single large telescope this may be two, smaller, identical ones. The data from these would be combined in software. There is potential in this idea for collaboration with, for example, universities, on hardware, software and professional or student projects.