Astronomy for the people 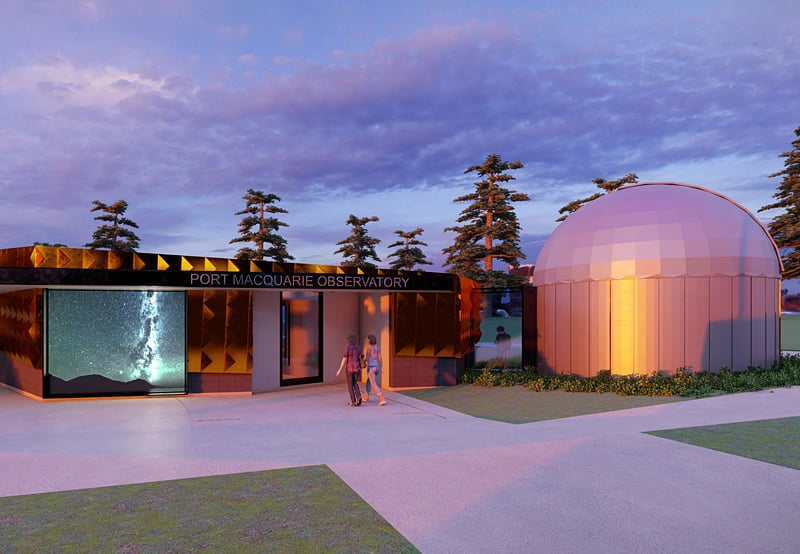 ABOVE: The new $4.86 million Port Macquarie Astronomical Science Centre is due to open in 2023. All architectural renderings are courtesy of King + Campbell.

The PMAA had been working on this project for many years. The current observatory is itself a landmark in Port Macquarie, located in Rotary Park adjacent to Town Beach. Anyone living in or visiting the area will pass it as they drive into the town centre. The new Centre will be even more prominent.

Port Macquarie has a long history in astronomy. Just how long depends on how far back you wish to look. If you consider that the Port Macquarie Observatory is built upon traditional Birpai land, then there is astronomical and environmental knowledge going back tens of thousands of years.

If you consider western astronomy, then it could argued that it all started with Edmund Halley. Halley had published two papers proposing that accurate measurements of the solar parallax of a planet could be used to calculate the distance to the Sun, and thus distances in the rest of the Solar System. Expeditions to conduct such observations were sent to many parts of the world in 1761 and 1769.

In early 1768, the Royal Society petitioned King George III to finance a scientific expedition to the South Pacific to observe the transit of Venus. James Cook was promoted to lieutenant and given command of the Endeavour. Cook, his crew and a party of scientists set sail and arrived in Tahiti in April 1769, in time to catch the transit. From their (and other) observations, the distance to the Sun was calculated to be 151.7 million kilometres. (From the 1874 and 1882 transits the distance was refined to 149.59 million km.)

Fast forward 113 years, and Port Macquarie had been settled for 62 years. In town there was a keen astronomer, William John Macdonnell. In 1882 he was assigned the job of documenting one of the next transits of Venus, on a location in the middle of Port Macquarie now known as Transit Hill. Unfortunately for Macdonnell, December 6 that year was cloudy.

In 1885 Macdonnell imported a telescope from Thomas Grubb’s Astronomical Instrument Works in Dublin, and installed it in the town in a purpose-built observatory behind the Bank of New South Wales, where he worked as manager. This 150-mm Grubb refractor has now been restored and is on display in the National Museum in Canberra.

Fast forward another seven decades and the owner of the Royal Hotel, Bob Stanfield, encouraged people to drop their small change into a container on the bar. This money was used to build Tuppeny Road at Flynn’s Beach. But continuing the collection, Stanfield was able to raise enough money to purchase a telescope for the Hastings District Hospital, intended for use by convalescing returned war veterans. From its hilltop location, the hospital commanded a magnificent view of the town and out to sea.

Unfortunately, the 127-mm refractor was heavy and hard to handle and provided limited use for a small number of people. As a result, it lay unused for many years.

The observatory is founded

Next, Albert York, a retired master builder and architect, tried to build an observatory on top of a building in Joffre Street but was opposed by a neighbour. The local Council enquired into the matter and among those on the committee were some Rotarians who became interested in the idea of establishing an observatory in Port Macquarie. So they asked York to address a local Rotary meeting.

As a result of York’s presentation, a Dr McLaren suggested that York inspect the dormant 127-mm telescope at the hospital. It became clear that due to the telescope’s size, a proper building would be required to house it, and so York was asked to draw up plans. They were approved by Council, and subsequently the Lands Department set aside some land in Rotary Park. The Port Macquarie Rotary Club made the construction of the observatory an official project — it was built during 1961–62 and the 127-mm telescope was installed.

Around the same time, towards the end of 1961, a public meeting was held at the CWA hall and the Port Macquarie Astronomical Association was formed. York was its first President, a position he held until 1983. He passed away the following year at the age of 94.

The Port Macquarie Observatory began operating in 1962 but it wasn’t until 1965 that it was officially opened by Dr Harley Wood, the then NSW government astronomer. The observatory houses one of two orreries designed by Dr Wood and built by Horace Pinnock, an engineer from the Sydney Observatory. The other orrery can be found in the Powerhouse Museum.

From the beginning, the observatory has been funded by the work of volunteers and admissions paid by visitors. Spare funds were still used to purchase equipment for the local hospital up until the time responsibility for funding for hospitals was taken over by the state government.

The observatory, which now houses a C14 Schmidt-Cassegrain telescope on a Paramount MX+ mount, has been opening to the public two nights per week ever since 1962 (excluding recent COVID-19 restrictions), plus additional openings for special events.

Over the years the observatory has been a significant astronomical outreach facility, unique to the NSW Mid-North Coast. Around 2,000 to 3,000 visitors per year have been amazed by the views through the telescope, seeing real ‘out of this world’ objects with their own eyes and being entertained and informed by our enthusiastic volunteers.

The PMAA also developed a range of activities for its members. Café Astronomy and Sidewalk Astronomy is held most months (disrupted lately due to COVID), in which members and guest speakers present on a topic of interest, not always astronomy.

Another project is the Cassini Group, a way for young members to learn the fundamentals of astronomy. This group is the brainchild of a PMAA member who was previously President of the Swiss Astronomical Association. The PMAA is very fortunate to have such experience and enthusiasm available through his active participation.

Dark sky nights are occasionally held in the district, when members take telescopes to events to show the public sights such as the Emu in the Milky Way, and to speak about some of Australia’s First Peoples’ sky knowledge.

The new Centre is conceived

PMAA celebrated its 50th birthday in 2012, with the help of well-known professional astronomer, Fred Watson (who has since become our patron). This was a time for celebrating our history and for looking forward to what we would like to bring to the public and our town in the future. The observatory, full of heart and soul from so many years, was nevertheless ageing and in need of significant repairs and modifications if we were going to embrace the 21st century. It was then that a plan was conceived to replace the observatory with a new Astronomical Science Centre, in a building that would be fit for purpose.

Over the following eight years, plans for the new Centre were developed and evolved through stages into the form that has now been approved by Council. The process consumed a lot of PMAA resources and a lot of time and energy from the committee, which is full of very hard-working members whose decisions are made with the betterment of the PMAA at their core. Many other members have made significant contributions to support the activities of the Association.

The new Centre will house not only the observatory, but also an 85-seat auditorium, display area, a multi-purpose function area, meeting room, kitchen, office space and accessible toilets. Outside, there will be beautifully landscaped gardens and lawn areas. We intend to save the old dome and relocate it in the new grounds.

No account of the Port Macquarie Observatory would be complete without mentioning one member in particular, former President (an office he held for 19 years), life member and active committee member, Jim Daniel. For many years, Jim’s contribution as a volunteer was a key part of the success of the Association and led to the current committee succeeding in developing the plans and obtaining the government grant to build the new Centre.

On one open night, a father brought his 8-year-old child along, and mentioned how his own father had brought him to the observatory when he was just 8 years old. On that night all those years ago, the young man and his father were given a presentation by Jim, which led to the man’s lifelong interest in astronomy. Fast forward to the open night in the 21st century, and by chance it was Jim presenting again — a whole generation on!

Jim exemplified the true value of volunteer members for an association such as the PMAA. He died in 2020 at the age of 91, and was active in the PMAA until the very last.

One could say that the future of astronomy is looking up in Port Macquarie. The vision of the PMAA is to bring astronomical topics to the public via a bigger, better facility, and engage, excite and inspire the public in the wonder of the natural world. We are seeing a new age of space exploration and Australia is investing in it and is part of it. It is PMAA’s charter to also be part of it and to share it with the public for at least another 60 years.

Robert Brangwin is President and David Edgerly is Secretary of the Port Macquarie Astronomical Association. For more information, go to https://www.portastronomy.com.au.